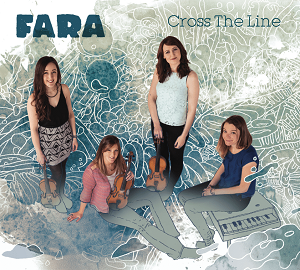 
Having grown up together in Orkney, Fara grew out of the rich traditional music scene driven by the likes of Douglas Montgomery and Bob Gibbon. Since making their debut at Orkney Folk Festival in 2014, Fara have already released an EP and are now sharing their first full length offering, Cross The Line. Having all travelled south to study, including Strathclyde University and the Royal Academy of Music, the album displays a wide range of musical influences, as well as the strong unifying thread of the Orkney fiddle tradition.

Opening with the energetic Dragon set the groups tune writing skills are instantly on show with Kristan's tune The Grower (this is on my tunes to learn list, absolutely love it!) The strength of tone from all three fiddle players produces such a rich sound and Jennifer Austin's driving syncopated piano accompaniment provides a really solid harmonic structure. The next track is a complete contrast, with a beautiful pizzicato and drone introduction and accompaniment. Shapinsay Polka is a lovely lilting tune, going into a lovely rich chordal break before a lovely harmonised version of the tune. Fisher's Hornipe is a more familiar tune to me and this is a really lively rendition with a fantastic groove.

A uniquely Scottish tune style is the strathspey and Louise Bichan's composition Jeremy and Regina is a fantastic contemporary take with a bluesy inflection and a really grounded feel coming from the lower register of the fiddles. The piano accompaniment is incredibly tasteful, leaving plenty of space for the tune, occasionally dancing above it in the higher register adding colour and interest. The intense build up into Catriona's tune Bright Grey comes as a slight surprise but draws the listener in to the new tune which sings as much as it drives.

Alongside the virtuosity of the tunes sets are the beautiful songs. From the haunting Three Fishers, with the lapping waves of a rolling piano and fiddle accompaniment enhancing the imagery of the lyrics to the lively Whisky You're the Devil, extolling the pleasures and perils of the national drink. My Heart's in the Highlands is a stunning version of the Robert Burns song and showcases Jeana Leslie's stunning vocals, alongside the group's strong vocal harmonies.

This is a showstopper of an album, phenomenal tunes, captivating songs and exceptional musicianship throughout. This is a strong contender for my album of the year, I would strongly encourage you to try and catch one of their remaining gigs of 2016.