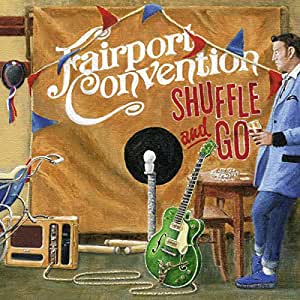 
Their thirtieth studio album and three years into their second half century, the thirteen tracks here comprise five from Chris Leslie, two Ric Sanders' instrumentals, along with songs by regular contributors James Wood, Rob Beattie and PJ Wright plus a James Taylor cover.

They kick off with hollow percussion backing one of Leslie's numbers, the slow march-paced 'Don't Reveal My Name', ostensibly the story of a card sharp, "young and foolish/With the pride of old Elijah", who narrowly escaped death when he was shot and now, "tricks and deals, friends and lovers/Left behind", is on the run "a price on my head/Where a rope waits hanging high" but you can't help thinking there's a deeper allegorical meaning too.

The first outside contribution is a collaboration between James Woods and Luc Boisseau and Philippe Richalley, who together comprise Rosermary and the Brainless Idiots, Nicol taking the vocals on the cascading chords of the summery 60ish folk pop 'Cider Rain'. It's back then to Leslie for the pairing 'Good Time For A Fiddle and Bow/The Christmas Eve Reel', the former inspired by the life of Donegal fiddler John Doherty and the latter a tune by Tommy Coen and the former a lively fiddle-led thigh slapper about the coming of winter and the comfort of a warm fire, a mug of tea, some tales told and a fiddle tune.

One of three tracks that pass the five minute mark and sung by Nicol, 'A Thousand Bars' is the first of two Beattie numbers, a mid-tempo number that juxtaposes a celebration of the traditional British pub with "people crossing swords and holding hands… singing some old forgotten song/How you and I are just the same, so why can't we get along" with a lament for hoe so many have given way to "pay-per-view and football on demand…And solitary drinkers, with nothing left to do."

With a slight McTell tinge, Beattie's other song, the slowly strummed, percussion tinkling 'Moses Waits', takes a wider view of a similar theme of community and change. This time, it's set in Kenya where "There's a country in between the country where he lives/Where commerce and capital run free/Where the spoils of history are written in hotels/And on their beaches and in their seas" while, emblematic of the exploited native population, Moses "waits for the answers, waits for the aid/Waits for the wages that never get paid". Where he "waits for the tips to make up his rent" from the western tourists who "only came to Kenya 'cause they heard that it was cheap". A call for reform and an end to the corruption that makes slaves of so many Africans in their own country, for a leader to "make the country that he clings to great again". And still, he waits.

Sandwiched in-between, and of a more upbeat lyrical and musical nature, is Leslie's title track, basically an ode to dancing away the 50s workday blues and finding love "down at the Palais" to Eddie Cochrane and rock n roll and quite possibly the only song to mention Old Spice aftershave.

Riding Dave Pegg's bass, 'Steampunking' is the first of the Sanders' instrumentals, his fiddle splashing Grapelli flourishes across a suitably frenetic dance tune with mandolin picking going on the background. Taken at an almost vaudeville ukulele strum, 'Linseed Memories' is Woods' second number, another song (sung by Pegg and originally recorded on his and Wright's duo album) reflecting on glory days long past here sung in the voice of the much-travelled cricket bat now "hanging in darkness from a nail by the door".

The arrangement bulks up for Leslie's catchy folk rock chug 'The Year Of Fifty Nine', yet another look back to the past, here imaging his three-year-old self witnessing a UFO sighting "like a spinning wheel" around Banbury in 1959 (based on a cutting from an Oxfordshire paper of the time), complete with playful references to Sputnik and The New Adventures of Dan Dare, Pilot of the Future, a Radio Luxembourg series, though, in the interests of pernicketyness it should be noted that the last episode was broadcast in 1957, when Leslie was just one. Good song though.

Another local reference comes with PJ Wright's 'The Byfield Steeplechase', an upbeat, traditional-styled bouncy clopalong (and I'm not the first to say it recalls Val Doonican's 'Walk Tall') tale about a seven-mile race over the countryside around Byfield, the birthplace of Sandy Denny, won by a cunning village boy making use of the mist and a bell to misdirect race favourite, Lord Wilkin, the local squire from Marston Hall.

Having sung of aliens visiting from outer space, Leslie's last contribution turns to the actual space race with 'Moondust and Solitude', a fiddle-backed waltztime song about Michael Collins, the third member of the Apollo 11 crew who stayed on board the Lunar Command Module while Buzz Aldrin and Neil Armstrong walked on the moon in July 1969, imagining how he felt being left behind, orbiting the moon alone.

The penultimate cut is their faithful version of James Taylor's unlikely traditional British folk sounding number 'The Jolly Springtime', which, in fact, was the coda to the title track of his 2015 album Before This World, and featuring John Gale on drums as Conway was indisposed on the day the set closing with the second instrumental from Sanders, the melancholic, courtly-styled 'Precious Time' which, gathering the instrumentation towards the close, serves as a fine conclusion to yet another reminder that, after 53 years in the business, they remain as fresh as ever.