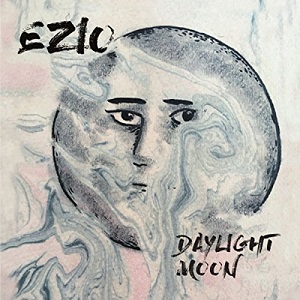 
A new Ezio album is like a menu full of your favourite dishes. You don't know what to like best, what to choose first, what to savour most.

Ezio Lunedei is a legendary songwriter. His songwriting material is a diverse and fascinating mix of musical and lyrical enterprises. Ezio doesn't limit himself by excluding musical genres, lyrical taboo topics or instrumental styles. This new album Daylight Moon is the most striking proof this phenomenon. At the same time, it sounds like a musical journey through his own work. There are songs reminiscent of all sorts of styles he and his band mate Booga recorded in past albums. First and foremost there is "Been a long time coming" in the centre of the album which evidently hints to "Waiting for too long" from the album The Making of Mr. Spoons (2003). But, what is more, this song quotes several of Ezio's lyrical phrases from quite a few of their earlier songs. Striking - an artist quoting himself lyrically and musically. It's a first to me and comes across as an acknowledgment, a little friendly gesture to long term fans but that of course is entirely felt from the subjective and distorted perspective of precisely this, a long term fan. Long term fans will also find it a nice coincidence that it's Peter van Hooke (Van Morrison and many more) playing the drums in this song, who was part of Ezio's performances and recordings in their early years.

Ezio have always been great in keeping unique features in their music like e.g. Booga's guitar sound or Ezio's moody vocals but at the same time to do things entirely different from what they've done before. Best example for one of those delightful surprises is "The Gypsy Song". It is a musical gem, uplifting in its character, ironic in its lyrics and it marvels with a delicate composition of drums (Sean McCurley), double bass (Lyn Seton), violin (Wolfgang Wehner) and guitar. This song specifically but also the album as a whole display Ezio Lunedei as a vocalist more than it has been the case on former recordings. The diversity of his singing with all its different shades and nuances gets more focussed. Not having any backing vocals on this album is an interesting detail of this focus.

One more line on the final song "Down, down, down" with the wonderful Lars Plogschties on drums. This song continues the decisive darkness and relished sadness of the former album (Adam and the Snake, 2014). It's good to hear the gloomy moodiness of that sound again. It's also good that the new album is not of the same character. But as a final track no other song could have done a better job.