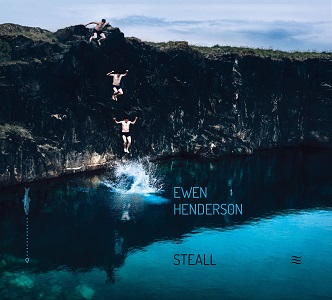 
There can be no questioning Ewan's status as one the country's foremost folk artists: a consummate singer, guitarist, songwriter and interpreter who communicates directly with his audience. At the time he emerged onto the scene, just over a decade ago now, he impressed all-comers with his uncommonly assured guitar playing and singing and his wholly intuitive interpretive style, but he's since gone on to make a series of landmark albums that have exhibited a consistent (and enviable) unfussy, no-nonsense top-quality. He's always turned his back on the temptation of over-production too, sensibly relying instead on his own considerable talent (and only a very selective use of other musicians) to make his mark quietly and precisely - and as a result (to my mind) all the more indelibly.

Borrowed Songs is Ewan's fourth album (fifth if you count his widely-acclaimed 2016 joint project with George Monbiot, Breaking the Spell of Loneliness). It gives every appearance of a simple, modest, back-to-basics release, yet its presentation doesn't skimp on the essentials, for on its inner panel Ewan provides the "just-right" measure of liner-note insight for its eight songs. Importantly too, in terms of instrumentation, this is a deliberately pared-down solo offering, Ewan accompanying himself on guitar (five tracks), or banjo (two tracks) or singing a cappella (one track); only on three tracks does Ewan permit himself the luxury of engaging Tom Moore for a lovely violin or viola part.

Borrowed Songs follows the pattern set by Ewan's earlier solo releases, in that its tracklist is split evenly between self-penned and traditional songs, once again demonstrating both Ewan's adeptness in either mode and his consistency of approach throughout. For, as Ewan states at the head of his liner-note: "whether traditional or self-penned, these songs are all borrowed songs. They all draw on stories, characters and experiences, whether real or imagined, that I've taken from other people and arranged or spun into songs". Stylistically too, it can be hard to distinguish between the two categories, so idiomatic is Ewan's writing. If seeking a ready comparison, I might (at least on the album's opening pair of tracks) invoke the name of MacColl, who possessed a comparable sense of history and political and social conscience and who was a doughty advocate and songmaker in his own right. Fittingly, then, Borrowed Songs' opening gambit is an a cappella original Windrush, which so very powerfully voices the testimony of a man who suffered at the hands of the government in the recent scandal, while the ensuing Blacking The Engines (set to a rollicking fiddle'n'banjo rhythm) celebrates the historical solidarity of East Kilbride factory workers with those struggling for democracy in Chile. Later on the album, Ewan's strong environmental conscience resonates through the clawhammer-banjo-flecked One Of The Last Of Its Kind, which takes the form of a conversation between grandmother and granddaughter and yet sports a memorable chorus; dedicated to Monbiot and Thunberg, it's a kind of follow-on from the Monbiot project (and could provide an apt companion piece for The Last Leviathan). The fourth of Ewan's own compositions, Down The Line, is a genial modern-day troubadour-style piece that effortlessly distils the aura of an idyllic, carefree romantic ramble; in this song I can hear an inescapable influence from one of Ewan's earliest hero-influences Martin Simpson, but it's wholly delightful nevertheless and the gently intricate guitar work provides a truly enchanting foil to Ewan's voice.

Turning to the traditional songs, the pick of these without a doubt is Ewan's memorable account of the lovelorn English ballad Our Captain Calls All Hands, which just has to be one of the finest available, with its matchless combination of superbly expressive singing and truly beautiful fingerstyle guitar playing. That song's a remarkably hard act to follow, as it happens - but even a frisky, light-textured take on Pad The Road Wi' Me (using Steve Byrne's adaptation), a percussively driven Rufford Park Poachers and the heartfelt staple "finisher" Wild Mountain Thyme can't disappoint (especially with Tom's gorgeous viola embellishments).

What a magnificent offering, then, is Borrowed Songs. Simply conceived, subtly and modestly configured. And replete with sensitive complementary playing and singing, musicianship demonstrating humility hand in hand with a true understanding of word-setting and of the chosen texts "imported" from tradition. Exemplary - its only failing being its undue brevity!

Òran a' Bhranndaidh (Song of the Brandy)