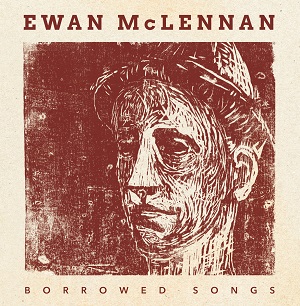 
Releasing his fifth album, McLennan is firmly part of the mainstay of the British Folk scene and treats us to a new collection of original and traditional song. Opening with an original a cappella tale 'Windrush' is quite a self-explanatory title, sung from the perspective of one of the first who boarded the ships bound for Britain. Birmingham, to be exact for this song. It makes a bold statement at the off and becomes one of the standout tracks of the album and shows Ewan at his finest, writing topical songs about real lives.

Most songs are just guitar and vocals excluding 'Blacking the Engines' which tells of Scottish factory workers and heir efforts of solidarity with the people of Chile. 'One of the Last of its Kind' which is dedicated to Greta Thunberg, George Monbiot and climate activists in which these songs trade guitar for banjo.

Ewan has previously layered his albums with a bit more violin / viola and perhaps seems a bit more sparse as the album only has eight tracks, four traditional and four originals. In a sense this to me feels a little unfinished as an album even though it comes in at around a modest 37 minutes.

The album concludes on 'Wild Mountain Thyme', a well-worn Scottish traditional rendition with delicate viola. A perfect closing song as Ewan contests to in the sleeve notes but I can't help thinking it's not the most ambitious of songs to interpret due to its reputation as a 'standard'.

The album is quite reserved, comfortable and relaxed. There are no punches pulled here, rather Ewan's latest offering is more of a genteel and less ambitious affair than previous albums.