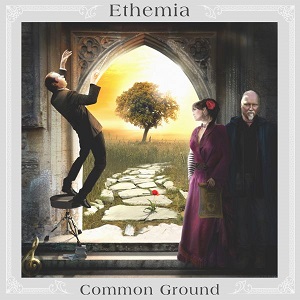 
Ethemia (Michaela Mott and Berny Poulton) are a duo who see their music as more than just a performance. It becomes a vehicle for trying to make their part of the world a nicer place, where the audience leaves feeling better than they did when they arrived. With some people that may sound pretentious but Ethemia have a passion for what they do that is so genuine they achieve it. Those who've seen them may have heard of the Sofa Sessions. This started when somebody contacted them to say that a relative wouldn't be able to attend a gig due to illness. Ethemia turned up at their house and played to make sure they wouldn't miss the show. It's that selflessness, that love, that gives this hard working duo such a devoted following.

For the EP Ethemia have moved away from the straight duo format and have used the studio to full effect, drawing on guest players to show the range their music can achieve without sacrificing the core elements. With the addition of drums, keys and strings the melodies develop beyond the usual harmonies to give a full band backing to the lyrics.

The songs can broadly be classed as love songs, although not true and beautiful love in the strictest sense. Opening the EP "Real Love", which will also be released as a single, is a ballad led by Bernie's delicate vocals and is a breakup song from the man's point of view. He's helpless as the relationship dissolves around him leaving to question if it was ever real love in the first place.

Michaela takes the second track "Changing Patterns" and in this case it's the woman having to make decisions. It's that point in a relationship where you have to make that of opening up, exposing yourselves, for love. There are big risks but big gains to be had and, although not made clear, it seems to work.

"Let It Rain" is a duet and again a situation many will be familiar with. The couple are in love despite their best efforts to break the relationship up; neither will listen, both want to score points and yet deep down that love is still there. The rain of the title is a metaphoric bucket of cold water to bring them to their senses before it's too late although as the song is written in the past tense they probably didn't make it. Despite this gloom it's a wonderful song, possibly my favourite on the EP with it's driving beat and strings underscoring the words.

Closing the EP "Love Crime" has a real pop beat to it and is a plea for a declaration of love from a woman who doesn't want to be kept waiting by her man. He can put up or shut up is the message. It's a glorious ending to the EP, buoyed by the piano, and one that I can imagine will get an audience moving.

There will certainly be plenty of chances to see the songs as part of an audience as Ethemia play a lot of live shows. Their website has an extensive list running right through the summer and an autumn tour is also planned. Go to see them, sit back and bathe in the warmth of two lovely people thoroughly enjoying themselves and asking no more than that you do the same.

The EP is now released and is available through their website. Ethemia have taken the decision not to put the album onto streaming services because they feel this is not the way to support artists. It's a bold decision and, I believe, emphasises their integrity.