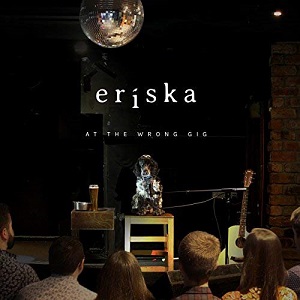 
Coming from the thriving traditional scene in Scotland, Eriska have just released their debut album. With a collection of degrees in a variety of genres, this album is firmly grounded in their excellent musical training, combining their wide variety of interests to create a confident and assured instrumental album

The opening set is a punchy combination of Ray Anderson by Duncan Johnstone and Jaws of the Pelican by Scott Figgins. The strong melody line up is underpinned by the rock solid rhythm section throughout. While the album is a mix of contemporary and traditional, the majority of the tunes come from fiddle player Madeleine Stewart. Fiddle Bee is a lively set starting with a bouncy hornpipe featuring the accordion playing of Aileen Sweeney before an electric guitar solo transitions into the driving Dariokart. Another strong offering from Madeleine is Spidergate. Starting with a more laid back feel to it, the interplay between the whistle and fiddle is particularly nice before building up to the more energetic Gate 103. Two More Weeks is another more relaxed number, with definitely jazz influences that work really well, especially the electric guitar in the accompaniment. The album finishes with a pipe led set of contemporary tunes, including Nae Pressure from Scott Figgins.

A standout track with a more traditional feel, Friday Afternoon is a fantastic minor strathspey, with all the clean articulation from the fiddle giving it a good sense of direction and drive. It builds to a really rocky arrangement that does on occasion threaten to drown out the melody. The fantastic fiddle solo seems to reset the balance and all the parts are clear from there to the end. The other stand out track for me is Sparrow, from accordionist and composer Aileen Sweeney. A complete contrast to the rest of the album, it showcases a more lyrical side to the band with a soaring melody and lovely harmonies between the whistle and fiddle. The combination of guitar and keyboard also adds a lot of interest to the accompaniment without overpowering the tune.

This is a great debut album from a young band who can only improve the longer they play together. With a huge wealth of talent and creativity between them, Eriska will be a band well worth watching out for on the live circuit