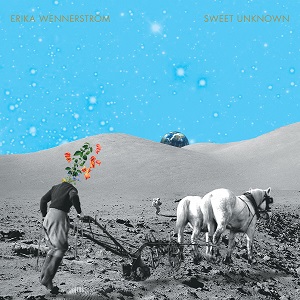 
The singer with Cincinnati's garage rock outfit Heartless Bastards, Wennerstrom's taken advantage of their temporary hiatus to indulge in a solo album. And when I say indulge, I mean one on which only two tracks are a few seconds under five minutes long and one is an epic ten.

It opens with the five and half minutes 'Sweet Unknown', a distorted drone and steady rolling muscular drums, guitar chords crashing, the melody building as she sings "I've been so blind, I could not see what was right in front of me" and how her "fingers bled, from holding on for too long", a number she describe as being about the process of self-acceptance and self-awareness; basically, a reminder to wake up to life around and not dwell on the past.

Nudging seven minutes, 'Extraordinary Love' mines a similar theme about learning to love herself if she wants to love others, an echoingly sung, soaring wall of sound with cascading electric guitars and keyboards set to a mantra-like rhythm. The country chugging 'Letting Go' is less dense, a bright drum beat underpinning strummed acoustic and chiming electric guitars, the title pretty much summing up the underlying sentiment.

A similarly lighter sound informs 'Time', a song about learning to trust your instincts and not be frozen by indecision or caught up in trying to control yourself, the summery melody line at times calling to mind 'Imagine' while the delivery itself has a touch of Stevie Nicks, violins adding flowing textures to the mix.

The vocals echoey and back in the mix, the slow swaying 'Be Good To Yourself' is, at under five minutes, the shortest track, by which time you should have got the thrust of the theme around which the songs are centred. Although keeping the pace to a slow waltz, 'Staring Out The Window' shifts the musical tone to a fuzzier, dreamy melancholy that reflects the self-blaming introspection she's exorcising ("For so long, I took to silence. Now I'm looking at the world in a different way") as she sings about having been "a natural disaster."

Then comes the ten-minute tour de force with 'Good To Be Alone', reverb drenching the narcotic soundscape as, in a slow, desert storm, the guitars take off into extended almost jam-like Crazy Horse territory while she sings about a propensity for introspection. It doesn't much shift in its shade or tone throughout, but there's an almost cathartic air to its swirling intensity.

Opening with chiming guitar notes, another self-examining number about breaking down the barriers she erects, 'Like A Bird' is rather like the calm after the storm as she sings about eh need to "open up and let the good things come", the melody line mirroring the resolution. It ends on another lengthy work-out, the slow ambling seven-minute 'Gravity', a song born from undergoing physical therapy to address issues from playing guitar and touring, extending that to a more internal process,Wennerstrom sweetly crooning over the sweeping wash of keys and simple repeated guitar pattern that she's ready for whatever life brings and the belief that that "my good days are ahead of me." On the evidence here, it's a tantalising future.