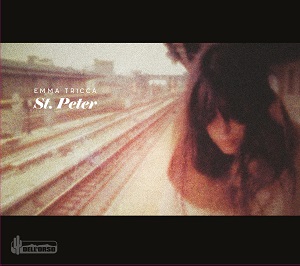 
The London based, Italian-born singer-songwriter strikes out in new directions with this follow-up to 2014’s Relics, variously formulating the songs and the shapes they would take in Rome, London and New York. She’s also recruited a diverse assembly of musicians to bring her visions to fruition, among them Sonic Youth drummer Steve Shelley, Jason Victor from the Dream Syndicate on guitar and fellow musical experimentalist Howe Gelb.

It opens with the fingerpicked airiness and shimmering keys of ‘Winter My Dear’, the track ending on a wordless chorale coda before a spoken sample heralds the atmospherically languorous five-minute ‘Fire Ghost’ with its almost incantory muffled percussive thrum, the obscure lyrics pertaining to a lighthouse keeper and drawing on her influence from the Crepuscolari Italian poetry movement.

The summery ‘Julian’s Wings’ is a relatively more straightforward piece with a cool New York jazzy folk vibe before 60s psychedelic waves lap over the six-minute ‘Buildings In Millions’ as it gradually blossoms into a euphoric tone underpinned by Shelley’s persistent drums and a haze of electric guitar before climbing to a dramatic climax.

‘Mars Is Asleep’ is more musically playful and light, a dreamy lullabying waltzer crooned with soft tones and an excursion into twangsome territory. It’s followed by the album’s longest two tracks, first up being the six and a half minute ‘The Servant’s Room’ which draws on the softer side of 70s folk rock and hints of Dylan, coloured by subtle understated piano, flirting with wah wah effects in the closing stretch. Then comes the seven minute plus ‘Solomon Said’, a number that features the album’s most stellar contributor and one of Tricca’s formative influences, Judy Collins who provides the spoken word mid-section narration of her own ‘Albatross’, from the ‘Wildflowers’ album, over the backdrop of what is otherwise a gradually building guitars and drums-based instrumental.

It all ends with feedback distortion initially setting the scene to ‘So Here It Goes’ which initially announces itself as acoustic fingerpicked and pure voiced folk tune only, one again, to metamorphisise halfway in and mutate into a brooding storm of industrial grunge. Unpredictable and exhilarating in equal measure.