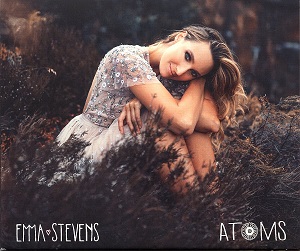 
I started following Emma Stevens when I met her in 2012 at a gig in York. I had heard her music before on the radio and wanted to see how she performed live. I was not disappointed and also learned what a really nice young lady she is too!

Since that time, Emma has released a number of both LPs and EPs, the early productions including some wonderfully imaginative artwork. I have them all now and have witnessed how her approach to music has matured.

I once described Emma as producing catchy pop music that always makes me feel that much better about life. Despite it arguably being labelled "pop," Emma's music is neither tacky nor predictable and is always wrapped around thoughtful honest lyrics, nearly all written solely by Emma.

This latest production, "Atoms" includes some wonderful harmonies provided by Kevin Jeremiah who also plays guitar. Their voices are perfectly matched and add another dimension to Emma's style of music and delivery. Subtle and gentle! The two tracks that Kevin sings on, "Because It's You" and "Soldier On" are for me the two stand out tracks on this delightful EP, although I really like all five tracks. The only complaint that I have is that five tracks is not enough, but then it is good sales practice to leave the audience wanting more.

If you have not heard Emma before, have a watch and listen on YouTube to the title track of this EP, "Atoms." You will not be disappointed. She is also on tour just now.

I thought back in 2012 that Emma was quite magical, and seven years on I still think the same. Beautifully produced gentle music with great story telling, a terrific live performer and a really nice person too! What is there not to like about this young lady?