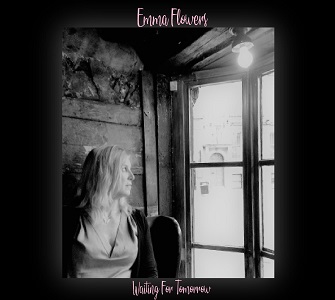 
Like Marina Florance among others, Birmingham-born Flowers was something of a late bloomer in taking up life as a singer-songwriter. However, after releasing an EP last year, she hooked up with Martin Stephenson who, impressed by her music, offered to produce this, her debut album.

Backed by musicians that include pedal steel player Malcolm McMaster from Radio Sweethearts', Connecticut-born Niles Krieger, fiddle and mandolin player with Newcastle's Assembly Lane, drummer Jim Johnson and Stephenson himself on assorted instruments, Flowers handles acoustic and electric bouzouki on a set of ten simply-arranged self-penned numbers that, delivered in a lived-in vocal somewhere between a country twanged Boo Hewardine, Gerry Colvin and a less gravelly Lucinda Williams and often about finding how who you are, encompass various shades of Americana.

The twangily upbeat country barroom bounce of 'All My Life' surely has an autobiographical resonance about following your inner feelings, but is also a more universal encouragement to those "Condemned to live in darkness and in fear/Living lives, not revealing its true meaning" and the self-doubt of how "Every time you try to get on board that life affirming train/There's a voice inside that tells you 'stop, it's not your turn again'."

Social conscience informs the equally country-styled 'A View From Down There', a call to not ignore the homeless and to take time to consider what brought them to such a low point in their lives, the theme of empathy and how we're all connected also at the heart of the jauntily strummed 'We're All Called Me', of the need to "look past the label" and not build walls to shut the world out.

On a similar note, the way the generation gap and the old school attitude of bottling things up can stifle parent-child communication ("We never had a conversation/So I lived a separate life/Never knowing what I was supposed to do") underpins the shuffling 'Singing April Showers', a reference to the Al Jolson song, as she sings "You were just a product of a world afraid to talk/Had you opened up your heart/Maybe I would have understood you more."

Pedal steel and fiddle making themselves felt on the mortality-themed honky tonk waltztime 'Fullness of Time' and how time can be "everyone's friend/But a fickle one when its back turns in the end …The whistle has blown, and you're left defeated."

By way of a musical switch, the relationship-fuelled optimism of 'Better Road To Come' has a rock 'n' rolling bluesy drive, 'A Little Bit Of What Kills' you turning the lyrical tables with a good love gone bad, picking up the pieces classic honky-tonk styled number where "It takes two to tango so they say, but I'll never dance with you …The lessons I am learning they don't need an old dance floor/Now I've choreographed your way right out the door."

A love song of a different nature, the steel-shimmering 'Soft Water City' is an ode to her home town and "the massed friendly faces, and their stoic smiles", the album closing up with, first, 'La Luz', a song about the Almanzora Valley in Andalucia, and then the handclapping, piano pumping, guitar-picking Buddy Hollyish 'Bridge To The Stars', a love song that manages to weave in a reference to Doctor Who.

Stephenson's production is unfussy and relaxed, but that just adds to the the openness of the songs and the album's downhome charms, which, while it may not set her on the road to the Grand Old Opry, will surely open many a door on the UK's country circuit. P.S. Buy the album from her website and you get her rather fine debut EP free too.