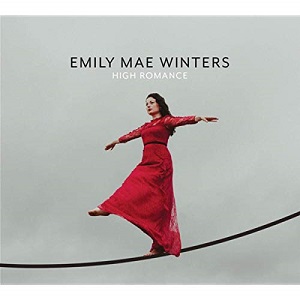 
HIGH ROMANCE, the second album from Emily Mae Winters, is a massive step on from SIREN SERENADE. The very English sound of her assured debut has grown into something informed by Country as well as Folk. Emily's voice, striking on SIREN SERENADE has grown in power and bite, developing an Americana Chanteuse edge. Comparisons with a edgy KD Lang or Shelby Lynne spring to mind. Matt Ingram's production and Ben Walkers searing electric guitar cook up a storm bringing out the smoldering otherworldly best in Emily on tracks like 'This Land'. There is light and shade with ambience and space on 'Would The World Stop Turning'. Double Bass, lightly brushed percussion, guitar and that aching killer voice deliver one of the finest slices of brooding Americana you will hear this year. Think rootsy Norah Jones. If 'Would The World' broods, then 'Wildfire' does what is says on the tin and burns, up-tempo and rocking.

Based on the Southern Rock ambience of the album and that glorious voice, you'd imagine Emily was born in Birmingham Alabama, not the one up the M6. Just shows how wrong you can be. There is a touch of KT Tunstall in the hand claps, percussion and gospel chorus vocals on 'Gin Tingles & Whisky Shivers', but the integrity, bite and power of Emily's vocal soon transends all comparisons. It will not be long before reviews compare others to Emily Mae Winters rather than the other way round. Winters attacks a lyric with a confidence and power not expected on a second album, well written songs like 'How Do You Fix A Broken Sun' sound like classic covers. When she opens up in the middle of the song her voice just roars with Bonnie Raitt depth and power, real hairs on the back of the neck stuff. HIGH ROMANCE is carefully sequenced too, so that intimate follows blast.

'Take Me In' has another attention grabbing vocal, but a husky nuanced performance over a picked guitar and bowed bass that stops your breath. The beautifully recorded Double Bass and percussion of 'Closer' has a touch of gritty Tom. Waits about it, again the track rocks with the maturity and confidence of someone grasping the big time with both hands. 'Across The Wire' is all about ambience and atmosphere, building slowly from a JJ Cale like groove to become sophisticated rock music with that late night TUESDAY NIGHT MUSIC CLUB Sheryl Crow feel. 'One of These Days' is another nuanced intimate performance, Emily works up a soulful quiet storm over delicate backing. The lyrics like so much of this album are powerful too, given an almost anthemic quality in the delivery.

This is a stunning album from someone who has taken Americana, County, Folk and more to their heart and it made it her own. Powerful songs, classic sophisticated players and a world class vocalist make this a sure thing for best of the year lists.

Come Live In My Heart & Pay No Rent