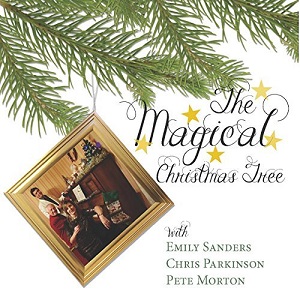 
The premise for this now-well-established seasonal show is the commanding presence of the aforesaid tree, from whose branches are suspended individual scrolls on which are inscribed songs, dances and entertaining antics - from which the audience is invited to create the destiny of the three musicians by choosing the order of performance on that night. The Magical Christmas Tree tour celebrates something like its tenth appearance by marking its debut on CD with the latest incarnation of its merry band of minstrels. Both Pete Morton and Chris Parkinson have been there since the beginning; at first they were joined by Roger Wilson, then Tom Moore, then the late, much-missed Maggie Boyle (to whose memory this very CD is dedicated), before Emily Sanders was the latest to respond to the call.

The ingenious mix of musical items conjured up by the mischievous tree is as welcomely wintry as it is specifically Christmassy, and even the more well-known pieces are surrounded by a genuine glow of "comfort and joy" that entirely eschews hackneyed sentiment - an expressive and affectionate In The Bleak Midwinter from Pete, a sturdy ensemble rendition of The King and a lilting instrumental take on O Come All Ye Faithful. The remaining selection is both intelligent and worthwhile, and definite highlights come with Emily's account of The Wexford Carol and Pete's rendition of Graeme Miles' beautiful The Snows Of Winter Fall, while Chris turns in a robust and jovial take on The Beggar that you can't resist singing along with. The little-heard carol What Is This Fragrance? provides another magical moment, as does the wonderful Follow That Star, Maggie Boyle's own original Christmas song which forms an irreplaceable part of the jigsaw. Vocally the three performers are well-matched, and their a cappella teaming is especially persuasive on A-Roving On A Winter's Night (another from Maggie B's repertoire). The instrumental dovetailing is also very persuasive, while seemingly effortless in the way you might expect from musicians thoroughly at ease in each other's company; it takes in a wide gamut too, from the lyrical Midnight On The Water and the genial reel Christmas Eve to a delightfully animated Moldovan Tune.

There's a delicious sense of fun about the live show, just one aspect of which is intentionally provided by the CD's bookending tracks (I won't spoil the surprise…). OK, the banter's necessarily absent, and inevitably the spirit of anarchy in the show's visual routines and showpieces can't be reproduced in audio, but this disc gives an otherwise completely faithful flavour of the energy, commitment and musicianship on offer, with a really attractive, natural, unadorned feel to the actual recording that ideally balances the various elements.