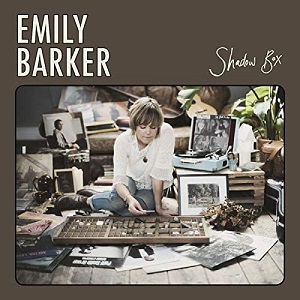 
For quite a while now, singer-songwriter Emily has been turning out superb-quality albums of her own material, both solo and, for nine years, with her celebrated band (The Red Clay Halo - close friends Jo Silverstein, Anna Jenkins and Gill Sandell). Other musical projects she's been involved in include Vena Portae, Applewood Road, and most recently (last spring), a spellbinding collaboration with Marry Waterson (A Window To Other Ways - reviewed here). There've also been excursions into music for feature film (Jake Gavin's Hector) and TV (the theme for BBC-TV's noir-thriller series Wallander) and occasional, select covers of other writers' songs. It's on the latter category that Shadow Box opens - the four tracks that made up the EP Songs Beneath The River which Emily and her band recorded live to disc in 2014 at Mark Ronson's Zelig Studios in London and originally released on 10" vinyl for Record Store Day that year. Marking their first appearance on CD, these tracks form a spectacular opening to the disc, not least Emily's passionate interpretations of Tom Waits' Day After Tomorrow and Bruce Springsteen's Tougher Than The Rest, although to my mind Patti Smith's Easter and Dan Penn's Do Right Woman, Do Right Man don't convince quite as much (tho' I stress that's a personal take).

Shadow Box is a generous hour-long collection that's neither to be regarded as a "best-of" nor a "mop-up exercise", for all that it contains some very fine performances. According to Emily herself: "Putting this album together was like taking a trip up to the attic and rummaging around for a long forgotten shadow box. As though picking up each dusty ornament, I listened back to these old recordings and found myself smiling and tapping my feet, as the music propelled me back…" And there certainly is a strong sense of being taken back, transported to the intimate yet vibrant musical world Emily always generates, with what's been described as her "persuasive blend of roots influences from country to English folk via 60s pop" (tho' I'd be tempted to add a few more tags in there too).

Shadow Box consists of three basic segments - first, the above-mentioned covers EP; second, a sequence of five songs from Emily & The RCH's biggest sold-out headline show at Union Chapel, London in November 2012; and finally, a little collection of "pebbles, shells and other memories" gathering together seven hard-to-find or previously unavailable tracks - some were originally issued on compilations, and many appear here for the first time on CD.

The Union Chapel recordings feature a version of Nostalgia, along with three more of her own songs (Billowing Sea, This Is How It's Meant To Be and Pause) and finally a cover of Neil Young's Look Out For My Love on which she and RCH are augmented by three more guest musicians. Sadly, however, two further songs available on YouTube - Tuesday and Fields Of June (the latter with Frank Turner guesting) aren't included for completeness…

The "Pebbles…" segment kicks off with The Rains and Every Season, which were recorded with Calum Malcolm in Glasgow in January 2012 and originally released as a digital EP along with Fields of June and Nostalgia, but up until now have only been on CD as bonus tracks on the German release of Emily's Dear River album. Then follows an experimental cover of Ewan MacColl's First Time Ever I Saw Your Face, which features Gill on piano and Liz Jones playing a memorable trumpet solo. Emily's charismatic solo cover of Hank Williams' I'm So Lonesome I Could Cry was recorded in January 2015 at Toe Rag Studio, but left off of the resulting Toerag Sessions CD. Both Harbour and Doing The Best I Can use basic tracks recorded by Emily at home in late-2014 and mid-2015 respectively, with band backings added later; on the latter cut, Emily sometimes sounds uncannily like Dolly Parton, methinks! … The final track's a bit of a curiosity: the eerie Beneath The Skin Of England, augments home with street recordings made in Stroud in June 2013.

I found Shadow Box a valuable and rewarding collection: I could say most treasurable. I might usefully leave the last word to Emily, then, speaking anecdotally: "One Christmas as a young girl, my Dutch grandfather gave me a box made of pinewood. He had made it himself. Each compartment was lined with green felt and it smelt like forest after rain. He told me it was a "shadow box" and explained that I could place small, precious keepsakes on the tiny shelves as a way of remembering moments in life. Sea shells; old coins; pebbles; wrens' feathers; a blue and white windmill pepper shaker from my Oma; a small brass dog - each room of my shadow box was soon occupied with little loves." How beautifully put; for I strongly suspect that the tracks on this collection will quickly become "little loves" for you too.