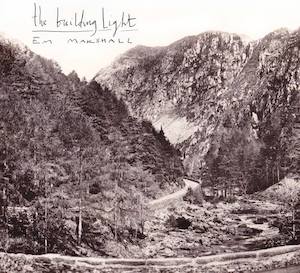 
Such is the quality of the performances, song writing and production on Em Marshall's new album 'The Building Light' that, if you were to tell me it was in fact a lost relic of the late 60s or early 70s 'Golden Era' of folk records I would not be surprised - it truly is that good.

Though at first it may be tempting to simply allow the gentle warmth of this album to wash over you, repeated listening and attention to details are rewarded as Em's earthy vocals and nifty guitar picking weave together to create a web of melodies that reveal themselves to be far more complex and symbiotic than you may initially think.

Her take on the traditional song 'Rosemary Lane' is as distinct as it is impressive - a captivating guitar part topped with a vocal performance full of sultry regret that also manages to sound defiant, changing the protagonist from a victim of her circumstances to a survivor, and proving once more that 'trad arr.' should never become shorthand for 'irrelevant'.

Alongside two other traditional songs, there are nine original songs which are revealing without being mawkish, nostalgic without resorting to whimsy, and, without exception, beautiful.

'Chesterfields' conjures up hazy images of places and times lost to one's past, those moments that you miss and yet know you could never return to, and features a short but sweet instrumental passage that seems to capture the feeling of morning light on frosted windows - it's absolutely gorgeous.

'India Song' which, taken at face value, concerns a motorcycle crash Em had 'somewhere south of Mumbai', on deeper listening conveys the thought that life is constantly shifting and evolving, that we can be admiring the trees and the river one minute and lying in the gravel the next, yet we're still constantly moving and experiencing life as it happens. And perhaps that is the overall theme of this album - life shifts, life changes, but life continues, hearts ache, break and mend again, the light builds and the beaches of our memories remain.

As debuts go 'The Building Light' could not have arrived more fully formed and, if you have found space for re-discovered albums by Vashti Bunyan, Anne Briggs and others in your collection then clear a space for this impressive debut as well, for it easily sits alongside those albums - a future classic that we can only hope is not lost.