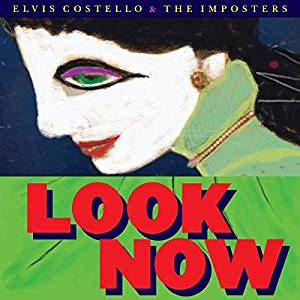 
It's a decade since Costello's last album with the Imposters - the punchy beat band workout of Momofuku - and five since his last set of original material Wise Up Ghost, an alliance with hip hop outfit The Roots. Both of those records had a startling immediacy about them, the sound of pure accomplishment, breathtakingly original music being made by the consensus of quality assembled before the microphone. The pops and crackles in both only add to the fizz of excitement each of them still brings with every listen.

Look Now is not like either of those albums.

That's not offered as any kind of criticism. Neither is it a recommendation. It's simply an observation, for Look Now is an album of fully rounded songs and melodies that belongs with the very best of Elvis Costello's recorded output.

Such is his facility with music, words and rhythm he's one of the few song and dance men that can successfully pull off such extremes of style and intent as the new wave venom of Armed Forces, The Juliet Letters song sequence, Blood & Chocolate's spit and polish, the country detour of Almost Blue, North's piano sketches and the baroque majesty of Imperial Bedroom, perhaps this record's closest cousin.

Look Now is beautifully made, fastidiously played and superbly recorded, each part is beautifully realised, perfectly judged and lovingly delivered. It is a magnificent record that feels right at home in the Costello canon where sour notes and vinegary invective rub shoulders and leer over sophisticated arrangements, highbrow intentions and lowly assignations.

The gorgeously executed balladry of the title track is in grand company with the urbane Photographs Can Lie, like Don't Look Now and He's Given Me Things, a co-write with Burt Bacharach in whose company Elvis is very much an equal partner. Indeed, the latter track is one of his best vocal performances this century.

Burnt Sugar is So Bitter, a heartrending collaboration with Carole King, finds new heights here alongside the rollicking Mr and Mrs Hush, Suspect My Tears with its lush Philly soul clip, the R&B stomp of Under Lime and the acidic asides as he skewers the May government in I Let the Sun Go Down.

Throughout he successfully finds new ways to chronicle the human condition in the world about him, from the mature woman struggling with time's ravages in Don't Look Now, to the failing marriage laid bare in Stripping Paper, there is nothing here to suggest Costello has lost any of the potency that has propelled his remarkable career and everything we need to be very excited about what happens next.