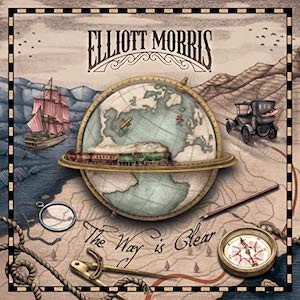 
Elliott Morris is a fine guitarist who can accompany, groove or solo as the song dictates. He also has a fine voice and a knack of writing pop folk songs with appeal. He is ably supported here by his brother Bevan on Double Bass, Alan Thomson on fretless bass, Innes Watson, Mike Vass, Rosie Hood from Dovetail Trio, the Paul Carrack on Hammond Organ, Lisbee Stainton on vocals and guitar, and Laura Beth Salter from The Shee. With this, his second album of impeccably crafted ear friendly music with depth it is surely on a matter of time before he becomes a big deal.

'Wake' is a instrumental opener, guitar over electronics that shows Elliott's effortless grace and prowess on the guitar. Morris' use of tapping has the space and resonance of Michael Hedges with the modernity of Ben Howard. 'Roll' is a classic 'on the road' song and a celebration of doing what you enjoy. 'The Way Is Clear' is an up-tempo romp with the feel of a Celtic Ed Sheeran, shot through with some atmospheric Whistles and soulful organ. Great use of space too as instruments rise and fall in the mix. 'Out On The Ice' uses that organ, Elliott's soulful voice and a great guitar motif in a very pop and radio friendly song. The end latches into that atmospheric Ben Howard groove again, hinting again at the level Morris' music is pitching for. 'It All Depends', like 'Roll', is a classic life goes on song, Elliott has a knack for writing songs that sound well travelled and weathered like standards or classics. 'The Way You Break' has a jazzy feel with beautiful piano and Saxophone. Elliott's soulful vocal is absolutely spot on. Musically and vocally there is a litheness and slight slipperiness touched with 'Dont Wanna Know' or 'One World' era John Martyn. Very JM too, is the way that ear worm guitar groove builds into the 'Break' instrumental with its muscular jazz ending. 'One Day You'll Know' is a stunning blues, that sets up Morris as a male Nora Jones playing a lovely languid guitar solo. You don't know what you don't know is both a truism and a wonderful lyrical refrain. 'Wildman Of The Sea' has a world weariness and folky gravitas like Seth Lakeman. Again the guitar slurs into 'Pentre', the album closing instrumental with stirring fiddle and guitar carrying the tune and some vocalisation from Elliott.

This is an album crammed embarrassingly full of fine guitar, soulful vocals and strong songs. From the understated opening to its fading waves on a Welsh beach close every moment oozes confident class. THE WAY IS CLEAR places Elliott among contemporary acoustic musicians like Sean Taylor, Dan Arborise and Ben Howard who are running with the legacy of singer songwriter like John Martyn. It builds on Elliott's earlier LOST AND FOUND, with a depth to the vocal and playing, here's hoping the title is prophetic.