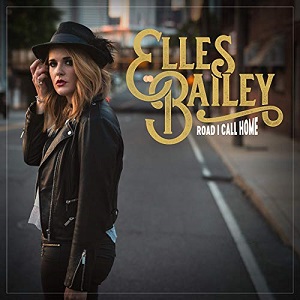 
In the crowded scene that is UK Americana it takes something special to stand out, or even be noticed, amongst so many good singer / songwriters. In 2017 Elles Bailey did that with début album "Wildfire", which launched to a host of plaudits and several million spotify streams. 2019 sees the launch of her second album "The Road I Call Home" so the inevitable question is will this confirm a new star or not? Based on the evidence, the answer is that it does.

This is a punchy album that grabs the attention right from track one "Hell or High Water" and doesn't let up right through to "Light In The Distance". Whilst "Hell or High Water" may open with a tinkling of electronic wind chimes and carefully picked guitar it soon develops into a driving rhythm with Elles' powerful vocals accompanied by riffs that say it may be Americana but isn't going to stick to the back roads of Country.

Title track "Road I Call Home" sits in the middle of the album and represents the whole concept behind it. Although the tracks were studio recorded mostly in Nashville Elles spends her life on the road, playing over 100 shows a year across the UK and Europe and that's a big part of who she is. She realises that the fan base, unless you have the machinery behind you to get mainstream radio play, is only going to build if you can out in front of an audience and make that personal connection. The track itself lifts the tempo, representing the rush of facing a live audience whilst not shying away the transient existent of a touring musician.
"Two hundred miles of this damn road, wouldn't change it if I could"

Closing the album "Light In The Distance" slows it down with just her voice and a piano, and also switches to gospel which highlights the quality and depth of Elles' voice. As part of the backstory one of her earliest memories is contracting pneumonia and spending several weeks having to breathe through a tube, which certainly added a huskiness to her voice but also an appreciation of life that's she's determined to live to the full.

This is a strong album, with each song on there on merit, and confirms that the Americana scene will always find room for a real talent. I've not seen Elles live as yet but the album has persuaded me to put that right at the first opportunity and there will be plenty, with 28 dates already up on the website covering March to July.

The album officially launched on the 8th March and, as of writing, was only available as a pre-order. Check the website for the latest information because this is one you should have in your collection.