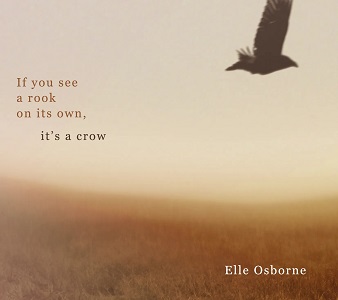 Elle Osborne
Album: If You See a Rook on Its Own, It's a Crow
Label: Self Released
Tracks: 11
Website: http://www.elleo.com


There's been a place in my heart for the quirky and idiosyncratic ever since I first heard the Incredible String Band, and Elle Osborne's latest - the wonderfully-titled If You See a Rook on Its Own, It's a Crow - has just crawled into that place and made itself comfortable.

OK, her voice is a bit fragile in places, but that just adds to the charm of this minimalist production - at times she's almost chanting over a backing of just light guitar-plucking and a drum kit. I know this sounds odd for a folk-based (I use the term loosely) release, but, in some songs - notably Stolen Goods - she reminds me of an ethereal version of Lou Reed.

There's humour and imagination here too, just check out some of the titles: Birds of the British Isles, No Hoof, No Horse (positively Ivor Cutler-ish), The Taming of the Shrewd.

I notice from her website that she's shared a stage with Alasdair Roberts, and she takes a similarly oblique approach to her songwriting. Some of the sound pictures she paints in fact recall Amble Skuze's contributions to the What News album she recorded with Alasdair. These are not themes you find on your normal, everyday folk CD.

So, if you're looking for a singalong set, this isn't it. What it IS is a marvellously evocative series of sound poems that amuse, intrigue, soothe, and stimulate. Atmosphere: that's the word.

Birds of the British Isles by Elle Osborne from eliza eagle on Vimeo.