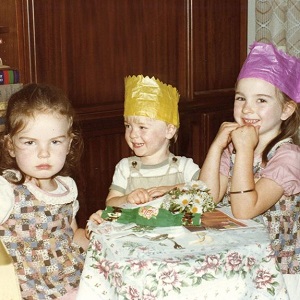 
Sadly, 'Middle Child' is a posthumous release for Eliza Jaye as she lost her battle with cancer in early 2020 aged 43.

I did not know Eliza myself, but everything I have read or heard about her pays tribute to her warmth, passion and boundlessly adventurous spirit; all testament to a life well and truly lived.

Born in Sydney, Australia, Eliza studied violin from the age of five before picking up the guitar in her teens having discovered the joys of rock 'n' roll. She started a degree in opera but left early after being drawn to the life of nomadic traveller and artist on a road that led her to Europe initially, and then on to the creative scene in Brighton for many years.

I cannot do justice to Eliza's life in music, or her life in general, in a review here so I would strongly encourage the reader to check out her blogs which can be found on a direct link from the home page of her website. These blogs chart every aspect of her life, career and struggle with cancer over the years and I found them to be both immensely moving and affirmation of an indomitable human spirit.

Moving on to this record, 'Middle Child' was Eliza's second full album release and consists of eleven original songs. Most of these were recorded at either his home or Mwnci Studios in West Wales by Joe Gibb (Leftfield, Catatonia, The Kinks) who also engineered and co-produced with Eliza. Eliza herself sings, plays guitar and violin with further very fine contributions from Abel Cross and Victoria Smith, Bass, Yotin Walsh and Oli Moule, drums Elin Lloyd, harp and Toby Dawes, Theremin.

Opening track 'Sugar Cane' chugs in on a heavily reverbed guitar riff and endlessly cool vocal that conjures up an early Chrissie Hynde/Pretenders vibe before opening up into a much wider pop palette, which is quickly followed by the angular sharp and sassy rhythmic voicings of 'Run Like The Nile'.

This opening salvo softens into the next four tracks at the heart of the album that show off the more reflective, soulful side of Eliza's music. 'Tenderness' features a dreamy, spacey vocal floating over lush harp lines, 'Deja Vu' follows in a similarly beautiful vein, 'My Sunrise' picks up the pace very slightly with its almost Trip Hop sensibility drum track and put me in mind of lovely 1990's Morcheeba, before this little segment is completed with the atmospheric 'Tigers' that conjures up some yet to be recorded James Bond theme that rolls over the opening credits.

Track seven 'Espionage' shatters any reverie and is back to power pop rocking drums and guitar, 'I Do' is somewhere in the middle pace wise and is pushed through by some wonderfully bumping bass, 'Orchid' is all superb vocal and languid rhythm, 'This Desert' starts simply with vocal over electric guitar chords but builds and swells, until final track 'Take The Time' brings the album to a close on a note of sublime beauty and optimism.

Judged purely on its musical merits, 'Middle Child' is a lovely little album full of infectious melodies and smart pop attitude, put together with obvious love and considerable skill from all those involved.

To finish, I can do no better here than quote the material that accompanied this album, "Eliza Jaye succumbed to cancer in February of this year at the age of 43, but she has left behind 'Middle Child', a truly beautiful album which stands as testament to her talent".