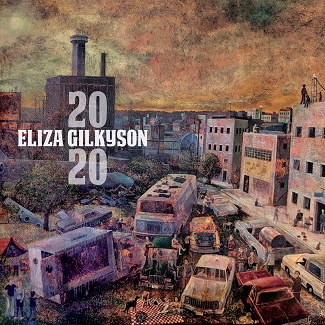 
Well known for her social conscience, Eliza Gilkyson's new record '2020' has arrived with its call for action in the year of an important US presidential election. Its arrival has found the world dominated by a global pandemic which might just distract some but, thankfully, it's a record with a call to unite that is as much about working together as a community, as it is about a specific political intention.

As with her earlier records, she shows that she is adept at selecting and interpreting the songs of others. Getting the Gilkyson treatment this time are Bob Dylan's 'A Hard Rain Is A-Gonna-Fall' and Pete Seeger's 'Where Have All The Flowers Gone?' Songs that offer an opportunity for audiences to protest through chorus singing in the classic folk music manner.

One of the standout tracks is 'Beach Haven' where she adds the melody to lyrics that come from the Woody Guthrie archives. The protest in this case being aimed at the segregation employed at a set of apartments owned by Fred Trump, the current US President's father. Like many of the tracks, the beauty of its presentation hides a serious message for the listener. If you miss the point on this track, she has an angrier message about the current US administration within the funkier 'Sooner Or Later'.

However, whilst protest is at the heart of many of her songs, there are moments of soothing balm at the same time - try 'Promises To Keep', 'Beautiful World Of Mine' and 'One More Day', for example. The most uplifting moment coming with the closing track and its universal message of hope, 'We Are Not Alone'.

She's joined on the record by her son, Cisco Ryder Gilliland, on percussion and production duty along with a number of other friends such as Bukka Allen, son of Terry, on keyboards. Other guests include Jaimee Harris singing on 'A Hard Rain Is A-Gonna-Fall' and Betty Soo providing harmony vocals elsewhere.

The '2020' album is a call to action from Eliza Gilkyson with a straightforward hope stating that, as she says, "may human decency prevail". It offers an articulate fist in a velvet glove styled statement of intent from a woman whose heart is always in the right place. You'll find yourself moved and motivated at the same time by this record.

Beautiful World Of Mine