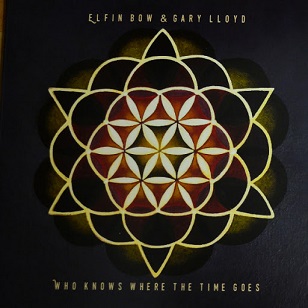 
"Who Knows Where The Time Goes" is unquestionably Sandy Denny's best-known composition, in fact it has come to be regarded as her "signature song".

Sandy's evergreen song has been covered by countless artists , beginning with Judy Collins who made it the title track of her 1968 album whilst other artists to cover it include 10,000 Maniacs, Mary Black, Eva Cassidy , Eddie Reader , Kate Rusby, Nina Simone and Barbara Dickson , to name but a few.

With so many cover versions, you would think that nothing new could be added to it.

Enter beguiling psych-folk singer Elfin Bow , who has released a stunning 7 inch vinyl single version of the song which has rapidly become my favourite cover version of the song and second only to Sandy's own rendition on Fairport Convention's 1969 album "Unhalfbricking".

The single is credited to Elfin Bow and Gary Lloyd who together came up with a sumptuous string arrangement which is beautifully played by the Scottish Session Orchestra conducted by Adam Robinson.

Elfin Bow's diaphanous, ethereal vocals are superbly complemented by the sweeping string arrangement which is redolent of Robert Kirby's work for Nick Drake.Yes, it is that good.

Elfin Bow has captured the essence of this ageless song and , in her own words, she sees this as "an opportunity to write a love letter to Sandy and to share her beautiful words with the world". Amen to that.

In these unprecedented times , this single is both uplifting and life-affirming.

Who Knows Where The Time Goes