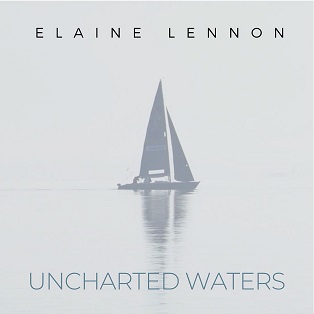 
In November last year, I received the debut album of Elaine Lennon to review for FATEA Magazine. I was immediately struck by not only the quality of the music but especially the sincerity of the lyrics. My first thought was that here is a lady who loves life and her family unquestioningly and has the ability to translate this devotion into music.

I described the album as the best debut I had heard in a long time and I am still of that opinion. Most of her music is underpinned by her subtle piano playing which, at times, is supported by backing that is never over complicated nor overpowering, allowing the listener to fully appreciate the power of her words.

Since that time through social media I have come to know Elaine much better and have thoroughly enjoyed her "Homebird Sessions" on Facebook. We have also exchanged messages about families and I feel that I have met, albeit as yet only in the ether, a kindred minded spirit.

Last year, Elaine and her husband suffered every parent's nightmare when her son Chris was taken ill and a tumour was confirmed. He was taken to Wishaw General Hospital, operated on and subsequently cured. This new single is therefore Elaine's way of saying thank you to the hospital for their care and support and all the proceeds of the single will go to the hospital.

"Uncharted Waters" is a beautiful piece of music accompanied by a moving and cleverly produced video. Once again Elaine's piano playing is to the fore but this time she has been assisted on harmonies by a veritable army of vocal support. Boo Hewerdine, Yvonne Lyon, Siobhan Miller, Findlay Napier, Karine Polwart and Chris While all accompany Elaine to make this a truly unforgettable recording. Boo also adds a bit of guitar and combined with Ewan Burton on bass, they afford the opportunity to Mark Freegard to mix a song that rises way above the normal charity offering.

The video itself consists of a series of reverse head shots of people looking primarily out over water and perhaps reminiscing on the past or wondering what is to come next in a life of Uncharted Waters. Elaine has a captivating feel for the English language and this is always predominant in her music. She uses her lyrics as a wand to demonstrate both love and memories, and one line in the song seems to sum this up for me, "Watching the footsteps of loved ones erased from the sand."

"Uncharted Waters" is a beautifully constructed musical and visual tribute to love and life and is a truly powerful way of expressing the sincere thanks of a family. You can download it from Elaine's website and support a very worthwhile cause whilst also recognising the treasure that we possess in the NHS.