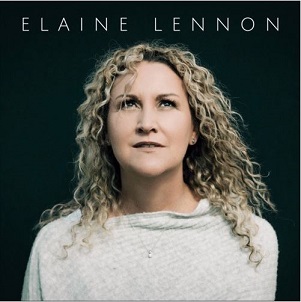 
One of the real joys of being a music critic is when you are sent an album to review from an artist that you know little about, but immediately fall in love with their music.

I have just received the debut album of Elaine Lennon from Scotland. On first hearing I was hooked immediately by both the quality of her music and her songwriting ability. Here is a lady who sings from the heart with real passion and who writes lyrics that you can both understand and associate with.

One of my favourite female artistes is Beth Nielsen Chapman who I have followed for many years and admired. She writes about life with an extraordinary feeling and compassion, and Elaine Lennon does likewise.

Elaine has written all the songs on this eleven track album with the exception of one song. "She's Got You" which was written by American country singer Hank Cochran and originally recorded by Patsy Cline. Elaine's version is different to the original and, in my opinion, better.

Elaine's vocals and piano playing are a sheer delight. The stand out track, for me at least, is "Only Love Can Break Your Heart." This song personifies her songwriting skills beautifully. She has performed this at The Bluebird Café in Nashville to an appreciative audience, and they know a bit about good music when they hear it. You can see this performance on YouTube.

Elaine has delivered songs on this genre defying album all of which have a slightly different style and feel. The "In Songs We Live On" is not only very prophetic but is also an ambition that all songwriters live by. It has also been cleverly produced with its 1930's scratched record feel to it and with its Andrews Sisters' harmonies. The producer Findlay Napier has played a blinder on this number.

Elaine is a lady who obviously loves both life and her children. Her song "Little Bird Little Sailor" has been written for her boys and depicts the hopes and dreams of every parent in the lyrics. The heartrending "Alone Here With Me" will resonate with anyone who has been let down in life. "Fear (Breakup Song)" does exactly what it says on the tin. It describes both the pain and the relief of a relationship breakup.

Elaine's debut album, to be released in January, contains some of the most powerful and passionate lyrics I have heard in a long time. A lady who pours her heart out through her music and shares her dreams and love with her fans and listeners. The whole production is a delight from first track to the last.

This is one of the best debut albums I have heard in years. Fabulous musicianship, powerful and thought provoking lyrics, all brought together with vocals that will give your heart quite a few tugs. It ends perfectly with "By Your Side" which seems to me to be a good place to reside. However, be aware that there is a sneaky little brief extra track, number 12, at the end of the album. Make sure you listen to it as It is very cute and closes the album in the way that you would expect of a devoted Mother. You will have to wait until January to buy it though!

This album has been supported by The National Lottery through Creative Scotland and I fully endorse the use of these funds for the development of young talent.