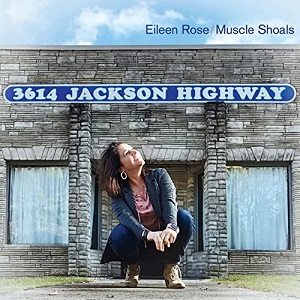 
As if writing two novels wasn't enough, last year also saw the Boston-born Italian-Irish singer-songwriter put together this double disc, recorded in the legendary studio with her regular band The Holy Wreck. The self-titled first disc is a collection of new material, opening up with the near six-minute Hammond-backed Memphis soul and gospel groove valediction of 'She's Gone' before cranking up the guitars and amps for the Creedence-like swampy boogie 'He's So Red'. By way of a swerveball, she then throws in the first of two covers, coming out of left field with an undulating, 'Albatross'-echoing take on King Crimson's 1981 number 'Matte Kudasai' with high lonesome pedal steel.

Clearly a band whose second home in a barroom, 'Get Up', 'On Shady Hill' and 'A Little Too Loud' all push back the chairs to make room on the dancefloor, offering slower, quieter respite with the circling guitar line melody of the soulful sway 'Am I Really So Bad?' and the poppy music box feel of 'Hush, Shhh', rounding out with the second non-original, a raw, unaccompanied reading of Brendan Behan's Irish classic 'The Auld Triangle', to which she's contributed a new verse.

For the second disc, taking advantage of the studio vibe, she's re-recorded ten numbers from the back catalogue, kicking off with the low-slung bass-led six-minute 'Shining' from 2000's Shine Like It Does, the debut album also revisited for three other numbers, a slightly more Patti Smith version of 'Walk The Jetty', a faster, rockier and more swaggery take of 'Trying To Lose You' and a very different arrangement of 'Rose' which really does underscore its kinship with 'Jealous Guy'.

Rose blowing harp, the slow countrified 'Good Man' comes from 2002's Long Shot Novena, her third album, Come The Storm, yielding the similarly laid back country soul 'Stagger Home', a hymn to the security of your backyard in days of uncertainty, and the jazzier climes of 'Never Be The Same' while, featuring Joshua Hadley, the folk-rock styled 'Old Time Reckoning' dates back to 2008's At Our Tables while the honky tonk 'Queen of the Fake Smile' from 2014's Be Many Gone gets a more country rocking rework. And, finally, a still deeply poignant song informed by the death of her father and brother, 'Sad Ride Home' from 2009's Luna Turista, sees things off in style.

Despite consistently rave reviews over the course of her previous seven studio albums, (and one as The Silver Threads), Rose still hasn't been rewarded with the wider success and audience she deserves. This may not change matters, but those who've been on the ride so far will be glad they still have a boarding pass.