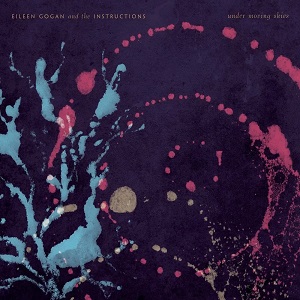 
The Dubin-based singer-songwriter has an impressive network of friends, this, her second album featuring contributions from the likes of Microdisney alumni Sean O'Hagan and Cathal Coughlan, Terry Edwards of Gallon Drunk, The Stars of Heaven's Stephen Ryan and former Undertones guitarist Damien O'Neill.

Self-produced and featuring eight self-penned tracks alongside two non-originals, it opens with the chiming guitar cascades on the wistful folksy pop 'More Time', O'Neill making his first appearance on tremolo with the dreamily soulful 'Don't Let Me Sleep', going on to play acoustic lead on troubled, abusive relationship reflection 'Echo', Coughlan completing Gogan's quietly aching vocals as she sings about teaching oppressed women to "kick against the pricks".

The tempo lifts for the samba-inflected 80s pop of 'I Don't Mind' before O'Neill layers harmonics over the enigmatic narrative 'Sweet Alice' while Paul Byrne colours in with dappled bongos and Edwards adds flute. A lighter note's struck on the sunny guitar lines and drum shuffle of 'Malibu Stacey', which takes its title from Lisa Simpson's Barbie doll but apparently is about the skimpily dressed adolescent girls you see hanging around for the late night clubs and bars to open.

By way of a tangent,'Friday Tune' is an O'Neill instrumental featuring him on mandolin, acoustic guitar and vibes, then it's back to the curiously titled 'Yes, Music Does Have The Right To Children' which, featuring mandolin and Niall O'Sullivan on bouzouki, has a touch of REM about it as she sings "you can never go home but you`ll always go back".

Referencing the time she spent living in California, 'San Fran 1997' welcomes O'Hagan and Ryan on guitars with another dreamy melody as the lyrics namechecks Red House Painters and John Coltrane and Ed McGinley plays the echoey guitar solo, a number where the comparisons to Natalie Merchant really come into focus, far more so than than Sandy Denny references usually bandied around.

With Coughlan and O'Hagan providing the darkly atmospheric wind-like backing effects, it ends with the six minute 'Celebration', an unaccompanied rendition of Lancashire-born Irish poet Nuala Ni Dhomhnaill`s poem about the resilience of Irish women, her voice drawing on a traditional Irish melody.

Thoughtful, at times quite meditative,it's an album that requires you to take time to listen and absorb, but it certainly repays the investment.