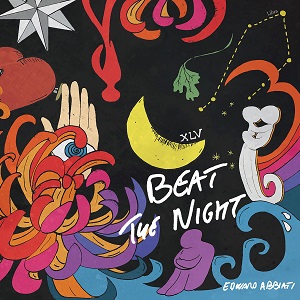 
BEAT THE NIGHT was intended to be a solo album, until a burst of song writing and some brief but intense recording sessions led to the charged album released here. The rapid writing and recording lends the set an intensity and cohesion, with common themes and a strong sense of an emotional specific moment in time and space. The title track is an upbeat rocker, vocals reminisant of a raw Mike Scott, layers of guitar, soulful organ and piano with an insistent drum beat. "I Got Hurt" is the injured flipside to the triumphant opening track. Edward's Americana vocal whispers while Mike Brenner's lap steel keens country melancholia.

"Look At Me" was Abbiati's first song after a writing dry patch. The potency of the words bleeds into his performance. Edward's guitar and vocal are charged from the start, carried higher on seething electric guitar, Louise Abbiati's etheral vocals and Simona Colonna's cello. "Hold Me Tight" is a beautiful pared back love song, a duet between Louise and Edward on the chorus and an opportunity for some more charged guitar and cello. "In Harm's Way" is a warts and all song about surviving. The accompaniment is soulful, sweet and soothing, but Abbbiati's lyrics deal with the struggle head on.

"Judgement Day #2" is an upbeat country song, another tale of struggle with an infectious beat and some nimble acoustic guitar. "45" is a delicate, bruised song, looking critically at himself Edward weighs up triumphs and troubles in a powerful performance. "Three Times Lucky" is a joyful celebration of the birth of Abbiati's third child. "I Cant Tell Ya" is a song about difficult times, a lots left unsaid, but there is power in the lyrics and the performance.

Steve Earle, whose earthy drawl is another album reference point, wrote "Goodbye" about the descent into the dark, Abbiati with "I Cant Tell Ya" succulently but emotionally describes climbing back into the light.