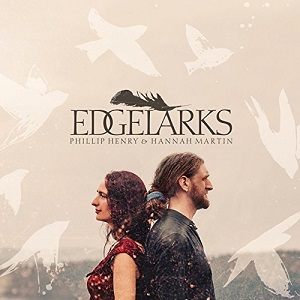 
It had to come – albeit some four years after winning the BBC Radio 2 Folk Award for Best Duo! Phillip Henry and Hannah Martin have taken the plunge and gone for a snappy renaming. And very appropriate it proves too – the verb “edgelark” means “to sing about or from the margins”, and the duo’s new album of that title embraces the common theme of liminal places, crossing and straddling those transitional spaces, expressing – with a quiet yet almost religious fervour – the hope that any transition and change both embodies and fosters. Recognising, of course, that we are all just passing through…

Right from the outset, with their debut album Mynd, the duo’s music has always occupied something of a transitional space too, with elements of Americana and eastern/oriental music transforming an original, homegrown and essentially British folk sensibility. The duo’s distinctive musical personalities and unique signatures remain firmly in place on Edgelarks, of course – most notably Hannah’s coolly assured yet strikingly sensuous (and thus tremendously captivating and involving) singing and Phillip’s mesmerising mastery of the special instrumental timbres of dobro, Weissenborn guitar, lap steel, Indian chatturangui slide-guitar and beatbox harmonica. These are brilliantly and sensitively complemented by Hannah’s own sublime fiddle, viola, banjo and tenor guitar, plus occasional drones from pedal-powered shruti boxes; additionally, there are frequent guest contributions from touring partners Lukas Drinkwater (electric bass and double bass) and The Little Unsaid’s John Elliott (some admirably subliminal percussion), the latter also deploying some imaginative production touches including the unobtrusive and highly creative integration of samples on three of the songs.

The songs, with two exceptions all original compositions by Hannah (with music by both Phillip and Hannah), pursue various aspects of the central theme with a delicate yet forthright lyricism. Landlocked explores mankind’s compulsion to travel through the story of Exmouth’s Nancy Perriam who joined the Royal Navy, while Undelivered was inspired by the discovery of a bundle of letters written in the 17th century that tell harrowing personal stories, and Borders recounts the true story of the flight of a family of Afghan refugees. Caravans intersects three true stories of strangers in a strange land in a slightly cryptic life-philosophy statement, while Signposts extends the concept of making connections through transition between boundaries and the edgy Iceberg focuses in on the cold unknowableness of human personality. On No Victory, however, the hope and positivism seems to have vanished; this bleak song is all the more effective for its claustrophobic drone, harmonica and beatbox setting.

Two of the album’s songs also crop up on Folk By The Oak’s Shake The Chains project (where Hannah was joined by Nancy Kerr, Findlay Napier, Greg Russell and Tim Yates). First there’s the disturbing Yarl’s Wood, which concerns the treatment of refugees at an infamous immigration removal centre, and second Song Of The Jay couches what feels like a plea for tolerance and equality within a portrait of the “scolding” bird, a Californian bush jay (and set to a rather ornate Joni Mitchell-like melody). Edgelarks also deliver two intriguing arrangements of traditional songs – Estren, an emigrants’ song from Hannah’s native Cornwall (the latter sung in Cornish), and a pensive, mystery-invoking take on What’s The Life Of A Man? whose theme links rather well to and from Hannah’s The Good Earth, which finally posits that “our short lives are greater together than apart”.

Like the songs on the duo’s preceding four albums, those on Edgelarks are given plenty of space to breathe, but never feel sluggish or drawn-out despite often being taken at a leisurely tempo. Hannah’s deliberately carefully moulded vocal enunciation tends to further accentuate this, and the result is always intensely compelling. Edgelarks is an album of refreshing unpredictability, and one that may take time to reveal all its nuances, but there’s plenty of detail to justify repeated close listens; very soon, however, you’ll be convinced, as I was, that it’s a rather special release and almost certainly the finest (yet) of a series of uncommonly fine albums by this duo.

Song Of The Jay