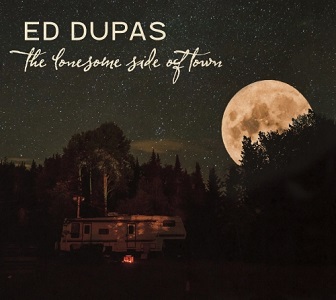 
While the title of Dupas's third album relates to the break-up of a long-time relationship it also chimes with the fact that, unlike his previous two, this wasn't recorded in the studio with a live band, but in isolation, laying down the drum tracks in a reconditioned church in Greenville, Michigan, and the bulk in his Ann Arbor home with the other musicians (eleven in all) generally recording their parts in different studios, affording him space to consider both his music and his life.

The uptempo title track gets it under way, both Nelson Wood and Drew Howard contributing steel guitar behind his raspy vocals, although, perversely, it's actually about not being let down and abandoned ("You shine bright when this hard life tries to bring me down/You showed up, you stayed around"). However, those looking for some misery quickly get the wistful strum of 'Lonely' ("You hold back the sun while I'm drowning in the rain… Lying to myself that you're my one and only") suggesting a relationship that died long before it ended.

Indeed, the titles often provide their own summary with things like 'It All Sounds Like Leaving' ("it comes as no surprise, you've lost that look in your eyes/Let's get on with the grieving, 'cause it all sounds like leaving"), 'The Things I Miss', 'It Tears The Heart Right Out Of Me' ("I've been waiting here so long, on a dream that's all but gone"), and 'I'm On My Way' ("You at the top of the stairs, me by the door/We've been here five years, you'll be here no more").

Elsewhere, less obviously direct, 'Hypnotized', a song about the cost a life on the road can extract, has him reflecting on how he might have tried a little harder ("I guess that's how I lost it all/Looking at your face when I should have called"), yet, at the same time, you also get 'Both Hands On The Wheel', another road number but one which, also rattling along with a driving energy, seems to be looking back on better times as he sings "still this road unwinds, draws the sun across the sky/And every town I leave behind brings me closer to your side".

The album's gaze isn't all turned inwards, the experience prompting him to look at the world around him and see the same frustrations mirrored back on the uptempo rocker 'State Of The Nation' where, in similar vein to his earlier A Good American Life and Too Big To Fail, he sings "I've been out here running like a hamster on a wheel/I voted for change, but there ain't no new deal".

However, while the bulk of the album may sort through the ashes of a relationship, it's not all downbeat. Musically, there's a strong positive force as he drags his rock roots to the forefront while, lyrically, both the dobro and lap steel shaped waltzer 'Just For Two' ("We will shine beneath the stars above/In a world made just for two") and the guitar ringing, Steve Earle-like alt-country rocker 'Love Me Right' ("Just take a hold of my hand, like lovers do/And love me right, like I love you") both shine light in the darkness.

Sure there's pain, but with it comes self-realisation and growth and having come through the fire, burned but not consumed, I eagerly await to see where the next chapter takes him.

Both Hands On The Wheel