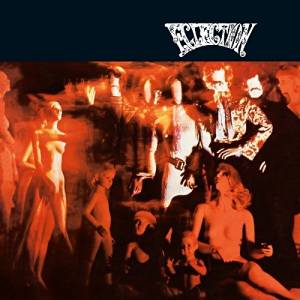 
This is a curio in more ways than one, representing the entire recorded œuvre (one album and a couple of singles) of a band based in Britain who recorded for the Elektra label yet boasted a sound that more closely approximated that of a contemporary American West Coast sunshine-pop/folk outfit like The Mamas & The Papas or The Association. The group name Eclection (a made-up word allegedly coined by Joni Mitchell) conveniently reflected the nature of its lineup, a distinctly interesting and unusual mix comprising members from Australia (Trevor Lucas and Kerrilee Male), Norway (Georg Hultgreen, who later renamed himself Kajanus), Canada (Michael Rosen) and the UK (Gerry Conway). Instrumentation was basically softly-guitar-based, gently melding acoustic and electric/12-string texturings, with dashes of trumpet (played by Michael - check out his excellent solo work on In The Early Days and Mark Time) and often ambitious orchestral arrangements by Phil Dennys (who'd worked with producer Ossie Byrne on the Bee Gees' early material), which with hindsight gave more than a nod to Love's Forever Changes.

A key element of the bright, airy group sound was Kerrilee's astounding vocal, her soaring, assured range a real asset that perfectly suited the combination of thoughtful, optimistic contemplation and flights of whimsical fancy that characterised the songwriting (mostly Georg's work, with a couple of songs by Michael). All the same, Kerrilee didn't take the lead vocal role on every track, since the group boasted no fewer than three very good singers (and Trevor did a great job on just one track too). There's a polished, rehearsed, well-upholstered air about the record, which is not surprising when you learn that the band hadn't played any live gigs at all prior to recording the album. This, together with the consciously "arranged" (as opposed to improvised) nature of the group's music, would also account for the uncertainty with which it was received by the record-buyers, since (again with hindsight, and quality notwithstanding) its character went rather against the grain of that of the band's contemporaries. Perhaps the most radical track was the disc's time-shifting, more overly dramatic finale Confusion.

Eclection never really made any kind of a breakthrough, for the arguably quaint, temporally out-of-synch nature of their music wasn't exactly helped by the band underwent a series of drastic lineup changes including the temporary recruitment of Gary Boyle and John (Poli) Palmer to replace Michael Rosen. But firstly, and most critically, Kerrilee suddenly left the band almost immediately after the release of the album, to be replaced by afro-American singer Dorris Henderson (who'd just recorded a couple of albums with Pentangle's John Renbourn), and inevitably this completely altered both the dynamic and sound of the group, as can be heard on the single Please (Mk.2), a re-recording of the earlier single of that name. Both, by the way, are included as useful bonus tracks on this reissue of the LP, together with B-side Mark Time. To my knowledge, this handsomely-presented Esoteric release marks the first proper UK CD issue of this album (let's forget the notoriously poor-quality international bootlegs and imports of the past decade or so), and it sounds suitably opulent in its splendidly well-remastered form.