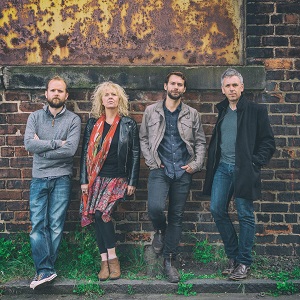 
The Eastern Swell are a neo-psychedelic electric folk band from Edinburgh. Their signature sound is built around the crisp guitar lines and imaginative song-writing of Chris Reeve and the silky-smooth vocals of Lainie Urquhart, underpinned by Andy Glover's agile drumming and Neil Collman's melodic bass runs. For their second album, "Hand Rolled Halo", additional colour and texture has been applied to the band's musical palette by Al Hamilton's trumpet and the cello of Pete Harvey (who also recorded and mixed the album at his Pumpkinfield Studios in rural Perthshire), resulting in a number of exhilarating flourishes and heady horn and string arrangements.

A number of the songs are pleasingly stretched-out, allowing space for bold instrumental passages, which suggest that they would work well in live performance. In the opening song, "Miles From Home", an absorbing guitar intro and a muted trumpet motif usher in elegant vocals and, following a sinuous guitar break, forceful trumpet and impassioned vocals propel the song to a fiery conclusion. In the band's take on the traditional "Blackwaterside", Urquhart's honeyed and lilting vocals are punctuated by a series of fluid guitar breaks from Reeve, as the band weave the tale of a thwarted male suitor. The same setting is cleverly re-visited later in the album on the band original "Down Again By Blackwaterside", which tells of a much more satisfactory romantic experience and is notable for jangling guitar, lovely vocal harmonies and layers of graceful and stirring cello ("...you and me are one and the same, down by Blackwaterside."). This song has pleasing echoes of 1970s folk icons Fairport Convention and Pentangle…little wonder it was chosen as the first single from the album.

The band's musical chops are showcased to good effect on the first of two instrumentals, "The Game", which rejoices in jazzy guitar and bass runs, mellow trumpet and elegantly sawing cello. "Spindrift" features moody guitar, an intoxicating vocal and a brooding undertow of cello, and the theme of lost love is accentuated by the extended, plangent guitar break which brings the song to a conclusion. The exuberant bebop groove of "Zeitgeist" serves up sleek vocals, gypsy jazz guitar, wailing trumpet and sliding cello, as it laments the emergence of fake news ("…a hand rolled halo won't keep you up in style, heaven knows they told you so…"). The bittersweet love song, "The Scene", is deliciously slow-burning, building to a repeated refrain, set against trippy guitar, tumbling trumpet and edgy ambient electronica in the fade ("…climb the hill and I will meet you there, all the bells will chime for you and me…"). The album closes with another instrumental, the gently free-flowing "Dreaming Of St Jude", where the warmth of the melodic trumpet and guitar interplay is underpinned by mellow organ tones.

With this engrossing second album, The Eastern Swell have successfully absorbed diverse musical influences, including classic psychedelia and electric folk from both sides of the Atlantic, in developing a distinctive and satisfying sound which will appeal to a wide range of musical tastes.