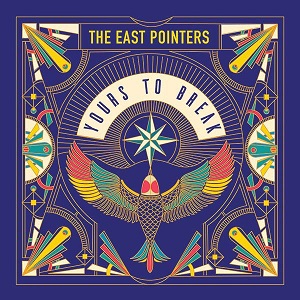 The East Pointers
Album: Yours To Break
Label: Self Released
Tracks: 10
Website: http://www.theeastpointers.ca


Just two years on from What We Leave Behind, the Canadian trio return with their third album, further building on their bedrock of traditional Celtic influences to embrace flamenco and bass heavy trance. It kicks off with the infectious tumbling rhythms of Wintergreen, a bounce-along song stemming from banjo player Koady Chaisson's bipolar diagnosis which he describes as "about offering a light in the darkness to those who need it" and "a vote of confidence from the perspective of someone who loves you regardless of which end of that spectrum you're at" which comes on like a meeting between The Lumineers and Graceland-era Paul Simon.

It's followed by the first of five instrumentals, 'Country Cable', a set of three tunes with thumping bass underpinning Tim Chaisson's fiddle and Jake Charron's keys in a sort of Celtic rave groove, the others being a similarly dance inclined 'Power To Move' with its sampled background voices, the moog-textured 'Before My Time', the more spooked pizzicato banjo title tune giving way to fiddle jig 'Come Back For Your Home', 'Light Bright' all pulsing dance beats anchoring sprightly fiddle and banjo, and the moody closing 'S.O.S' aka 'Save Our Sharks', opening and closing slow with fingerpicked circling guitar with the fiddle and handclappy percussion lifting the uptempo midsection.

Returning to the songs, 'Halfway Tree' has a dance jam beat and ghostly lyrics while,the more reflective 'Elmira', co-penned with producer GordieSampson and from whence comes the album title, is named for town in Prince Edward Island near where the Chaisson cousins grew up and, described as "about all the relationships and connections you form throughout life, and that it's in your control to keep those connections, or part ways and take a different path", has more than touch of boy band ballad about it.

The album heads to the finishing post with Koady's banjo to the fore on the rhythmically jerky but smoothly sung soaring balladry of 'Mystery Cove' and, in similar stadium crowd-friendly, 'If You're Still In, I'm In'. I'm not persuaded the push towards a more contemporary party groove entirely serves the material and both it and the commercial sheen may not sit well with those who came aboard with the first far folksier album., But, as they say, while tradition is all well and good, it needs to be made relevant to the next generation too; perhaps it just needs to be a bit more radical than this halfway house.