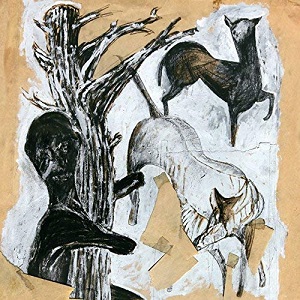 
Originally from Dublin and now based on New York's Lower East Side, O'Leary has been likened to Leonard Cohen, a comparison that's readily understandable on hearing 'Harbinger', the gently lilting opening track, his spirit permeating both the melody and vocal; elsewhere, however, his laid back, warm voiced folksiness reminds me more of vintage Tom Rush.

The whole album has a very relaxed vibe, not always reflecting of the lyrical content which can a dark or unsettling edge, often, as reflected in the title's reference to the holy day commemorating the departed, dealing with notions of loss or things passing. The latter certainly underpins Bywater, a gently undulating number featuring Benjamin Lazar Davis on baritone guitar and Thomas Bryan Eaton's pedal steel, set in the titular New Orleans neighbourhood on the day of the dead and describing the ritual of placing offerings on a raft lit with candles that is then set out on the Mississippi, floating down to the Gulf of Mexico.

Guided by pedal steel and a pump organ drone, time passing is also at the heart of Omaha, a love song to the meetings and partings and brief catch-up conversations of old times at airport bars with its memories and dreams of those once known. Slightly more uptempo with scuffed drums, Emily Miller providing harmonies and Jefferson Hamer on telecaster, Second Bottle is a pedal steel-caressed pragmaticly seductive suggestion to a date to spend the night because the mood is mellow, the evening's late and "you won't find a train this side of town."

Having been in New Orleans and Omaha, the album travels to a wintery Montreal for the shimmering jangle of 'Marina Blue' with its reference to local streets and the evocative line "I left my crutches on the oratory steps for you." He remains in Canada for the lyrically poetic fable 'Our Old Dominion', where, displaying both Cohen and Stan Rogers sensibilities, images of the Newfoundland landscape merge with a lover that welcomes him into her cabin only for him to be enticed away to join an ill-fated fishing crew.

Again underpinned by pump organ drone and brushed snares, 'Monique' laments a relationship in its death throes ("the pieces in their closet lay before the last dash of injury time was made") while the 60s folk influences of such names as Jackson C Frank and Eric Anderson can be heard in The Weary Child, an absolutely lovely song about being a free spirit and the siren calls of the road, the taverns, brief encounters and, providing the framing image, the sea.

The waltzingly Cohenseque 'The Painted Road' again speaks to O'Leary's poetic turn of phrase with a bittersweet storysong of young newlyweds in a moment of hope and a future stretched out before them, trusting "in our work and the lay of the land" and of the memories of later years held in the old books and the traces of the past.

It ends on another echo of Cohen with the simple acoustic, glockenspiel-tinkling slow waltzing sway of 'Trouble No More', Miller providing the harmonies on a song about a literal death ("he breathed his last in the bathtub one evening") and that of a relationship ("we had the whole of the ocean in the tip of our cup but it was not enough"), but one that closes on hope rather than sadness ("our love may be wrong but our timing is right") and that, when the dawn rises, "then my old friend we will love again."

An album suffused by the sighs of darkness and the whispers of light, like fellow ex-pat Ben Glover, O'Leary has an Irish soul and an American heartbeat. Embrace him.