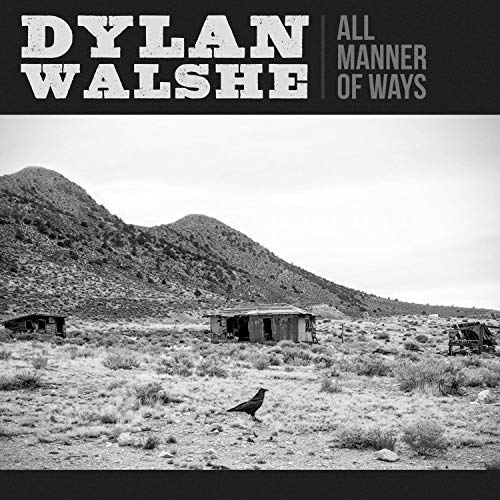 
Over the years many things have attained have attained mythical status, an honest politician, £350 million a week for the NHS, Excalibur, dragons and a full Dylan Walshe studio album to name but a few. Fortunately, that last one has moved from mythical status into a list marked legendary.

I first met Dylan through the late lamented Bob's Folk Show, even sharing a studio with him on one occasion. That lead to me putting out a track "Your Belly Not Mine" on the Spring 12 Fatea Showcase Session:Walking, which I think I'm right in saying was his first release.

A near fatal accident that same year put recording plans at that time on hold, before a single, "Blind Is Blind" emerged on Squoodge Records in 2013. Since then there have been occasional tracks on compilations and a well-received live album "Soul Hell Café" back in 2015.

So who is Dylan Walshe? We'll that's a difficult one, the facts are easy, Dublin born singer-songwriter, troubadour, poet. He's a musical traveller that has attracted a genuine cult following that have ensured his sporadic releases have always reached an audience, arguably not the one that a talent of his size deserves, but there has been many a literary legend that have had that litany only to be feted by the mainstream when the mainstream catches up.

As a writer and performer, Walshe has a way with words that is difficult to under estimate. If James Joyce had also been a guitar picker, it's possible "Ulysses" would have been condensed into a single album. Fortunately, Joyce wasn't an axe man, to my knowledge and that has left the path open for Dylan Walshe to deliver an opus that, may or may not be up there with "Ulysses", but is definitely the portrait of an artist.

"All Manner Of Ways" is ten tracks, twelve if you count a couple of remixes at the end, that are pure poetry, both in the lyric and delivery. I had expected this to be a stripped back album of man and guitar, but was pleasantly surprised to discover that Walshe had made the decision to add additional musicians to the album, a choice that was right on the mark as John Mailander's fiddle contribution shows on "Where Dublin Meets Wicklow".

These are living and breathing songs, some of which were on the previous live album, all with their own character. A listen to "The Trickle-Down Effect", quickly reveals an impact that twelve thousand marchers might not, but both have a time and place.

And, so far, I've not really mentioned Dylan Walshe the guitarist. He doesn't waste a word or even a vowel in his lyrics, similarly not a note or chord goes astray in his playing. It may not be the most dynamic playing you'll hear, but you can feel the quality as it rolls of the strings.

When Christy Moore, describes you as a wordsmith, it sets a very high bar, lesser performers may be intimidated by that, for Dylan Walshe it doesn't seem like false praise. I wasn't under selling it when I said that "All Manner Of Ways" make the move from mythical to legendary..