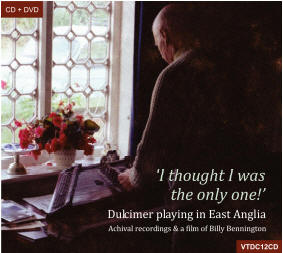 Various Artists
Album: I Thought I Was The Only One!: Dulcimer Playing In East Anglia (CD & DVD)
Label: Veteran Tapes
Tracks: 38+9
Website: http://www.veteran.co.uk


The East Anglia region has probably boasted more players and makers of the instrument in question than any other area of England. And here, the word dulcimer denotes that played (struck) by "hammers", rather than the (plucked, and altogether smaller) Appalachian dulcimer. Nevertheless, some of its players have believed that they were the only one still playing - hence the title of this beautifully presented CD-plus-DVD package.

The CD delivers a glorious hour's worth of performances by nine different players from Norfolk, Suffolk and Essex, each with their own style of playing and level of skill. The recordings date from between 1958 and 1998, and sadly some of the performances are but fragments, but even a cursory listen reveals much about the players' different styles - and convinces us that the sound of the hammer dulcimer is a joyously resounding assonance rather than an intrusive and annoying clang. The three players who get the lion's share of disc space are Billy Bennington from Barford (Norfolk), Billy Cooper from Hingham (Norfolk) and Reg Reader from Knodishall (Suffolk), and the generous allocation enables the listener to appreciate the variety of expression and delivery within each player's technique (while for those interested, a more comprehensive audio representation of Billy Bennington's artistry is available on the wonderful Veteran CD The Barford Angel, reviewed back in FR138, to which I would refer those readers seeking more detail).

Suffice to say that the repertoire of these East Anglian dulcimer players is open-hearted and suitably wide-ranging, embracing tunes for stepdancing (there's three different renditions of the Sailor's Hornpipe here and two of Soldier's Joy, as well as polkas and breakdowns), sundry waltzes, music-hall (I Belong To Glasgow, Two Lovely Black Eyes, Down At The Old Bull & Bush), standards (Ain't Misbehavin', Swanee River), show tunes (Over The Rainbow, South Of The Border) and ragtime (Dark Town Strutters' Ball). The latter is one of the sparkiest performances, and other highlights include a virtuoso Post Horn Gallop from Billy Cooper and a stirring "Unidentified Tune" (which turns out to be Sibelius's Finlandia) from Oswald Stammers.

Moving on to the companion DVD, this brings us a short film of Billy Bennington, originally made for the EFDSS in 1979, centred round a front-parlour concert situation in which we get various closeup views of Billy playing nine tunes in his own inimitable way (and propelling a jig-doll to a pre-recorded tenth) - interspersed occasionally with snippets of an interview with the musician. So impressively nifty is Billy's playing that I half expected him to turn around to the dresser behind and rattle the teacups with his beaters after finishing the tune! This film is a treat, and none of the tunes are duplicated on the companion disc (although most of the titles crop up on The Barford Angel).

You may still regard a disc of nothing but hammer-dulcimer playing as a bridge too far into the world of niche marketing, but trust me, this is delightful, and has been compiled with affection and exemplary attention to detail (aside from the most uncharacteristic cover typo - "achival" (sic) recordings! - that might lead the unwary to expect Scottish music…). Better-than-decent biographical notes are crammed onto the digipack, but even more copious notes from the Howsons' ongoing research are to be found at www.eastangliandulcimers.org.uk.