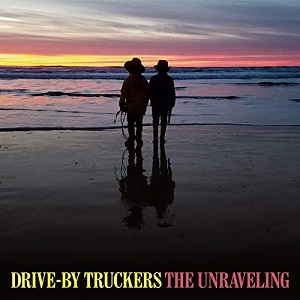 
It would take a special kind of ignorance not to have noticed that we live in particularly turbulent times. You would have to be a hermit living in a cave deep in the middle of nowhere not to have been impacted in some way by the rise of populism and the disheartening divisive political landscape it has created. Four years ago Drive By Truckers released American Band which warned against the coming storm, and after their longest ever gap between albums, The Unraveling is a record very much set in the aftermath of that storm.

The Unraveling isn't a subtle album, but then perhaps the time for nuance and subtlety passed a long time ago. This is an album formed of anger and indignation, unfiltered and full of venom. These tracks are not swimming in allegory or poetic language; lyrically it's simple, in your face, and all the more effective for it. Babies In Cages is the perfect example. It's not hard to grasp what the song is about, and the furious disbelief drips from every line. Thoughts and Prayers is another one, taking aim at the hand-wringers who trot out the same useless words with every tragedy while doing nothing to prevent further ones from occurring.

Not every song is quite as on the nose. 21st Century USA has a touch more subtlety to it, but only a touch. It is reflective and contemplative, with slightly more of a lyrical playfulness to it, which makes it one of the stronger tracks on the album. Grievance Merchants is another, condemning the white nationalists keen to exploit the fears and deep-seated prejudices of others. It was inspired in part by the murder on a train in Portland of their family's babysitter's best friend, with the political becoming very personal.

All in all, the album is a furious condemnation of Trump's America, though frankly anyone concerned about the resurgence of the far right will identify fully with it too. There's a persuasive argument that we need more of this kind of anger in popular music, across every genre, but there's no doubt that it lends itself well to the Drive By Truckers sound. If you want to listen to something that will get the fires in your soul burning bright, The Unraveling is highly recommended.