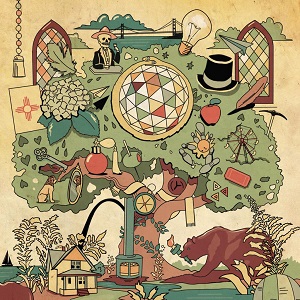 
Recorded in the Catskills with Simon Felice on producer duties, the fifth album from the New York-based folk-rock five piece fronted by Joe Kollar and violinist Clare Byrne sets a theme of restlessness-themed with 'CalifornIA' as the latter sings how he's "got a train station in my mind" while the mid-tempo shuffle 'What You Do To Me' has a trace of Simon & Garfunkel about it as it travels from St. Louis to Las Vegas. On the other hand, the jubilant cascade of the violin-coloured 'New Year's Day' calls to mind the shimmering sounds and harmonies of Darlingside as do 'Lay Like You Do', a catchy chorus love song with Kollar on banjo and Dan Forysth on vocals, and 'Stick With Me'.

Elsewhere, place markers on the road map include Tennessee and the wildfires namechecked in 'Conquering Man', another uptempo driving number, here with Byrne on lead, while, towards the end she pulls the musical tour bus into Santa Fe with its simple rippling electric guitar accompaniment and thoughts on getting older. The need to be always on the move is also at the heart of 'Lost Child', another reflective Byrne-fronted track, with the troubled title character "taking the train, heading for the edge of the Earth."

The more celebratory, softly sung title track has a rolling wheels rhythm, Kollar singing about kindling the fire, flowers in bloom and how "I am the rain, I am the blue in the sky" and how the balm of nature belongs to everyone, Byrne's violin adding texture in the final stretch.

Similar sentiments about opening yourself up to what's around you, the tempo shifting 'Goldmine' soars on piano and violin clouds, musically uplifting and with a positive message despite lines like "you hate your girlfriend" and "everyone you know will die."

It ends, paradoxically, with 'Hello', a slow swayalong, all join in stomp sung by Forsyth, a sense of an ending number about following your heart down through the weeds and emerging from dark times, "in from disaster", infused with optimism, "all in together singing sweet songs", as Forsyth swells the spirit with "we finally made it, we're finally home" for all the Christmases and New Years. Rest beneath its branches and revive.