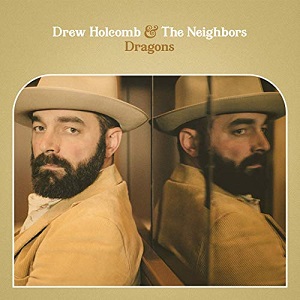 
The results of being hauled off to Echo Mountain studio in Asheville, North Carolina, 'Dragons' comprises ten tracks in just over half an hour that reflect years of challenges and good old fashioned hard work for Holcomb the man and Holcomb the musician. The aim of harnessing a more modern sound and "expanding the emotional architecture so that the bigger themes would have space to hit harder" is applied to the Americana and Southern Roots core as collaborations abound; six songs are co-writes and see his wife Ellie Holcomb, Lori McKenna, Natalie Hemby and The Lone Bellow are all featured alongside the man seen in some circles as a legend in his own lifetime.

Kicking off with 'Family', there's an infectious 'Graceland' style vibe and swing that continues into the full of fun declaration of "hey it's the end of the world!" - it seems a strange thing to celebrate yet the message is clearly about "throwing a party to fight off the darkness." Live for today and "revel while it lasts" is the theme and why not as we live in times where there's more than enough to get worried about while the song casts some light in a revelatory way. It's an opening pairing that develops into a more sensitive direction. 'But I'll Never Forget The Way You Make Me Feel' is a paired down and humble shuffle and along with 'See The World' offer a shift towards a more thoughtful musical perspective after the hoo-ha of the opening flurry.

'You Make It Look So Easy' ramps things up again on the final lap before the melancholy of 'You Never Leave My Heart' and a 'Bittersweet' that you could see our own The Travelling Band doing a job with, leave us in a reflective mood. "What you always want won't always be around," he sings; a musical reminder to keep fighting the good fight as the title track says ("go slay all the dragons that stand in your way") and never give up.