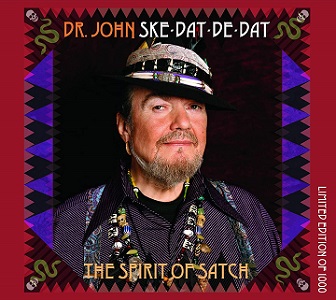 
This is a re-release of the late Mac "Dr. John" Rebenack's 2014 album Ske-Dat-De-Dat: The Spirit of Satch. It's the ol' voodoo medicine man's take on a selection of songs from the catalogue of Louis Armstrong - from the 20s to the 60s.

He's working here in close collaboration with arranger Sarah Morrow, and with an array of guests - some well-known, others, like Cuban "Timba" singer/rapper Telmary, perhaps being given a break the Good Doctor figured was overdue.

As you can perhaps guess from the above, this isn't a jazz recording as such - although it does feature amazing horn arrangements and players of the stature of Arturo Sandoval. Instead, it takes the Armstrong songs, and, in the main, squeezes them into modern clothes, with salsa, funk, and rap featuring strongly. Mack the Knife, for example, becomes a rap/funk groove that would fit perfectly as the theme for a police procedural series like Bosch.

Probably the closest to a Louis-type arrangement is World on a String, where Mac duets with the bluesy Ms Bonnie Raitt who, I'm assuming, plays a real 50s-ish guitar solo unmodulated by anything aside from the period's signature reverb canyon. Apart from that, it could, stylistically at least, have been a duet between Louis and Ella.

Dr John himself switches between piano and vocals, mixing-up singing solo, duetting, and taking the sideman role in favour of guests like Telmary or R'n'B singer Ledisi. Of the duets, my favourite is a funked-up take on Louis and Billie Holiday's Sweet Hunk o' Trash, featuring blues lady Shemekia Copeland, who really has a voice to be reckoned with.

Much of the album however draws, via those fat horns, on the kind of late 60s/early 70s jazz-funk sound that characterised so many TV and movie detective tales. That sort of thing seems to be making a bit of a comeback due to its atmospheric sound and rolling rhythms - my mention of Bosch wasn't just a casual aside. If I were the showrunner for such a production, I could do worse than dip into this album for my theme and background tracks. Motherless Child would be a prime candidate, and is also, arguably, the best vocal production here.

My only reservation about the production is that the vocal quality is a bit variable. While Motherless Child is perfect, the opener, an uptempo What a Wonderful World, would really have benefitted from less top and more middle to warm it up from the rather harsh result we have here. However, that's a minor quibble, this is an excellent album from a much-missed musical personality.