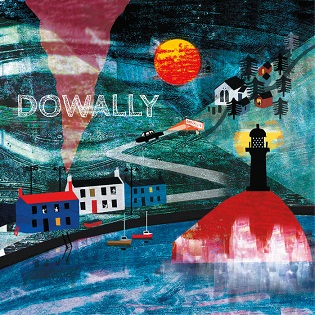 
Dowally is a Scottish trio that forms the creative meeting point of three musicians from very different worlds: traditional (fiddle and low whistle player Rachel Walker), klezmer (accordionist/pianist Phil Alexander) and jazz (guitarist/double bass player Daniel Abrahams). That meeting-point is bound to be “somewhere”, which, so the story goes, was the qualifying prefix to “off the A9” that alerted the musicians to a hamlet of that name. And that’s good enough for me! But perhaps even before all that (maybe), the trio was invited to record its first album in 2015 by cellist and engineer Graham Coe; I’ve not heard that record, but by all accounts it was a product of supremely spontaneous invention at a magic moment in the studio, so the decision was taken to make the followup an altogether more considered project. Graham is once again heavily involved in its recording, though, so there’s bound to be a sense of connectivity between the albums.

The usual image and expectation for a new young Scottish trio may well be of three musicians wearing a prodigious virtuosity on their sleeves, often at the expense of a more mature musicality; but this is emphatically not the case with Dowally. There’s plenty of virtuosity, make no mistake, but it’s channelled with abundant sensitivity and the individuals clearly feel no need to rush through their music for the sake of making a quick impact. Not that they don’t make an impact – but it’s actually a much stronger impact for its concentration on melody and dynamics and integrated responses away from easy “instant gratification”. The thrills quotient is thus more subtle – and to my mind more long-lasting.

The album’s opening track, Sunday Brunch, is a suitably laid-back affair, relaxed and equable, during which the musicians react to each other, and to the melody, with an easy and playful ingenuity. The comfortably inventive nature of their music-making is a feature of the whole album, however, although the very next track (Fluorescent Banshee) could not be more different – it’s a frenetic “mash-up” of (wait for it!) Arctic Monkeys’ Fluorescent Adolescent and Irish reel The Banshee, and full marks to guest singer Dominic Blaikie for actually rendering the lyric intelligible (if still not quite making complete sense!). The album’s only other vocal track is a surprisingly effective, rather dark take on the old Beatles smoothie And I Love Her, which amply proves the worth of taking a fresh look at such classics.

Back to the instrumental tracks, then: all are joint Abrahams-Walker compositions, and the emotional-see-saw principle proves a unifying force, characterising the trio’s music (and the album) without making it all seem inconsistent. On Castellation, the klezmer dash is much to the fore, and Be Mine Or One takes the jazz road, while St. Vincent’s and Veruda are both more episodic (though intelligently so) in both nature and execution. As for guests, Graham Coe’s fearsomely fiery, sturdy cello underpins four tracks, and Ciaran Ryan contributes some extra fiddle lines, while Ciaran’s tenor banjo features on two of the most animated tracks: Chris & Emily’s, with its fluid, blues-inflected intro leading straight into an Irish jig guitar-banjo duet, and the disc’s closing track Port Inn Hornpipe, which builds from that sparky, cheeky dance into a riotous ensemble-vocalised reel finale, sending us off with a big loony grin (it won’t send you doolally, but it will take you to Dowally!…).