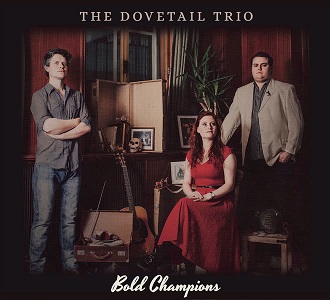 Quinn's concertina taking the lead, Rosie on vocals with the others harmonising on the refrains, they kick off with 'The Light Dragoon', sometimes known as 'The Trooper and the Maid', likely dates from the Napoleonic Wars and is something of an early example of female emancipation in that it's the woman who makes the initial move in the seduction, although her trooper is quick to respond.

Sung a capella with the three harmonising, Roberts up front, 'Black Eyed Susan', originally a poem by John Gay, is a staple from the traditional repertoire, this version learned from the singing of Walter Pardon. Squeezebox back in the spotlight, 'The Bold Keeper' (aka 'The Bold Dragoon') is another evergreen, again featuring an empowered lass, this version learned from Harry Brazil with additional lyrics borrowed from Bob Copper and penned by Quinn, who takes the lead vocal.

Maintaining this feminist thrust, drawn from the subgenre of women dressing as men to follow their lovers, usually to sea, fingerpicked and sung by Roberts, 'A Broadside' is perhaps better known as 'The Female Warrior' in which the woman in question not only joins her sweetheart's ship but become sits captain and the hero of the naval battle.

Hood returns to the unaccompanied spotlight for 'Death & The Lady', the lads joining in the chorus of another staple, albeit with a few adjustments to the words and the tune by the trio. At which point we arrive at the concertina-led title track, collected around 1916 in South Cerney and, sung by Hood, telling of a prize fight match between Bold Robinson and Young Taylor, the former dying in the ring and latter emerging the victor only to die three days later, though it's a purely fictional account. It must be said, the chaps here give good 'hurrah'.

Having finally got round to death, they stick with the theme for Quinn's six-minute plus reading of 'Flower of London' in which, Hood providing counterpoint vocals, a rich merchant looks to prevent his daughter's marriage to, naturally, a young sailor, all three of them winding up dead, either from sword or sorrow. The body count increases with the unaccompanied three part harmony of 'The Wreck of the Northfleet', the true account of how, in 1873, a sailing ship was struck by a steamer with only 59 surviving out of the 379 on board.

The jewel in the crown of the Copper Family repertoire, accompanied by guitar and concertina 'Claudy Banks' recycles the age old tale of a sailor returning home in disguise and testing his love's fidelity by saying that her Johnny is dead, Thankfully he reveals the truth before she usual traditional folk song route of killing herself out of grief.

One of the most covered and frequently reworked songs in the folk canon, a tale of sororicide in which the dead girl's bones and hair are crafted into a fiddle that sings of her murder, the trio found their jauntily strummed and squeezed version of 'Two Sisters' in Cecil Sharp's book Eighty English Folk Songs, this being the one as sung by George Fradley with its 'bow down' refrain where the miller (it's always the miller) are immediately caught and hung, the trio burning the elder the sister at the stake for good measure.

The song was collected by Sharp in the Appalachians, and it's in the Ozarks were the studio recordings end with Hood singing lead on a lovely reading of the hymnal 'The Old Churchyard'. There's one final track, a bonus six minute live a capella 2018 recording of 'Four & Twenty Fiddlers', a satirical cumulative nonsense song about assorted professions dating from at least 1719 that sees the album off in stirring and merry form.

Having now released two albums of their interpretations of traditional material, with Roberts having written with Katriona Gilmore and Hood restyling lyrics here and on her own album, it would be interesting to see the third spread its wings into original compositions in a traditional style. Just a thought.