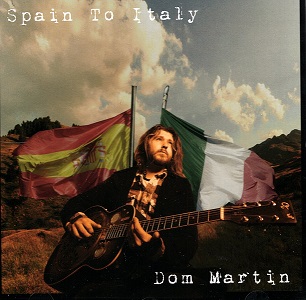 
Back in May of this year I received an EP to review from Belfast musician Dom Martin. I was immediately struck by the raw power of his vocals and his sublime blues guitar playing. Dom's musical influences are, amongst others, Rory Gallagher and Muddy Waters and the sound and drive of both artistes is apparent in his music.

I knew very little about Dom at the time and I finished my review stating "Dom Martin, a name to watch and listen out for and an LP to wait for with uncontained enthusiasm." Well, the wait is over and the LP has arrived.

All four tracks on the original EP are included again in this new twelve song album with the title of the EP "Easy Way Out" opening the set and introducing new listeners to Dom's gutsy and gritty voice. Not all of the tracks are delivered with drive and gusto and "Spain To Italy" the title track of the album shows that Dom can also deliver subtlety and gentleness. In this song, although not one of his stated inspirations, he does demonstrate a touch of Springsteen with his vocals. His simple but effective acoustic guitar playing perfectly matches his vocals on this track.

"Out On The Western Plain" is the only track on offer here that has not been written by Dom, having been beaten to the punch by Leadbelly. The song also affords Dom the opportunity to show off his immense talent on guitar. The same can be said of ""Dry Bone Rag" which is the only instrumental on the album.

"Dog Eat Dog" closes this superb blues influenced collection from an artist that fully deserves to be recognised, listened to and admired. The lyrics of this song state that "every dog has its day" and if Dom's has not already arrived, it cannot be far away. A musician of unbridled talent and a future that is assured!