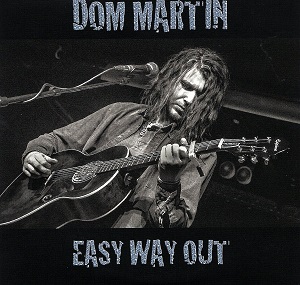 
Belfast born Dom Martin's EP is an introduction to his forthcoming LP, due to be released later this year.

A relatively new name to most music lovers, me included, Dom is well known in the pubs and clubs of Belfast for his very own particular style of Blues. He is rapidly building up a solid fan base, appreciative of his superb guitar playing and gruff bluesy voice.

If you like your Blues in the style of Muddy Waters, then this guy is most definitely for you. His voice is perfectly suited to this genre of music and his guitar playing is of the highest calibre. Whether playing finger style acoustic, electric or slide guitar, he shows an accomplishment on the instrument that is quite rare. When combined with his songwriting skills, the end result is an EP of genuine quality giving the listener a real insight into what is going to come next from his recording studios and what to expect from a live show.

The overall feel of the recording is of a smoke filled club late at night and invokes images of The Deep South of America. It is so evocative that it might even make you cough! If the smoke images don't get you, Dom's voice most certainly will.

Four tracks are not enough to really gauge where his career is going but it does serve as an appetiser for the main course due in 2019.

Dom has already been featured on BBC Radio 6 Music and Radio 2's Blues Show, the latter providing a perfect platform for him to introduce his music to a waiting world. Air time is vital to all artistes and the endorsement from the BBC will certainly not harm, his future.

"Antrim Blues" is the stand out track for me and enables Dom to show his guitar playing skills to their best whilst paying homage to his home county. All four tracks offer something different, but all are laced with his fabulous Blues voice.

Dom Martin, a name to watch and listen out for and an LP to wait for with uncontained enthusiasm