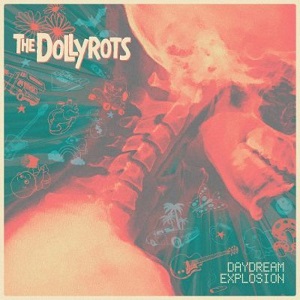 
Their debut album for Stevie Van Zandt's label (earlier releases were through Joan Jett's Blackhearts Records before going DIY) finds husband and wife team guitarist Luis Cabezas and bassist/singer Kelly Ogden in ebullient form with a fizzing set of trademark pop punk flurries, albeit throwing in a few stylistic variations along the way. Again produced by John Field, who's twiddled knobs for Jimmy Eat World and All Time Low, it romps out of the starting gate with recent singles 'Animals' and 'Everything' which, if you want closer to home comparisons, might call to mind The Primitives with its ringing, chugging guitars, pounding drums (courtesy Noah Levy) and Ogden's vocals. On a wider scale, touchstones would doubtless include Blink-182, The Ramones, the Runaways and Cheap Trick.

They take the pace down for the sweetly sung third single, 'In Your Face', a midtempo arms-waving stroller with a big crowd-friendly shouty chorus before a touch of Beatles keyboard psychedelia and birdsong introduces another bouncealong, 'Naked'. Things don't much deviate from the initial template, the likes of 'The Last Ones On Earth', 'I Love You Instead' and 'Oblivious' coming with more sherbet fizz hooks than a bag of dab, the sort of things to have you leaping round the room with the sheer exuberance of it all, posing danger to any fixtures and fitting that get in the way of cartwheeling arms.

They don't do ballads as such, but 'Watching The Storm Go By' gets reasonably close, conjuring a hint of 'Will You Still Love Me Tomorrow' alongside a mid-song spoken passage straight of the Shangri-Las textbook. They do, however, slip in a stylistic detour with 'Flippy in My Red Dress', a finger-snapping number about casual sex that sounds like it might have escaped from the some 60s spy movie soundtrack. Ending more parentally responsible note with a love letter to their toddler daughter, 'Daisy's Song', it's one of those albums that has no pretentions about changing the world or pondering its politics, it just wants to give everyone a great time and, as such, as the song says it's assuredly the 'Kat's Meow'. 'I Know How To Party' they sing, and indeed they do. Hey ho, let's go and take a bottle.