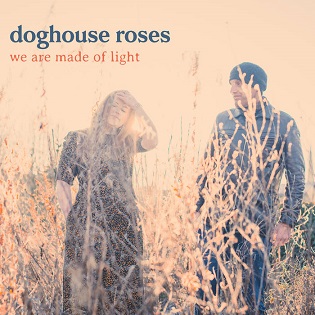 Doghouse Roses
Album: We Are Made Of Light
Label: Yellowroom
Tracks: 12
Website: http://www.doghouseroses.net


Glasgow based Folk-Americana duo 'Doghouse Roses' are made up of Iona Macdonald on vocals and guitar, and Paul Tasker, guitars, banjo and harmony vocals. They have been performing together for some 15 years and 'We Are Made Of Light', their fourth full album, is a collection of songs written over this time but never previously recorded. Of the twelve songs here, half are performed solely by the duo as though in a live setting, and the other half with added percussion from Neil Allan and strings from the finely named 'Pumpkinfield Trio', made up of Rik Evans, Viola, Harriet Davidson, Cello and Kate Miguda, Violin. Eleven of the songs are written by Iona and Paul, although it's not clear if they are written as co-writes or individually, and the twelfth track is a cover of Peter Greens 'Oh Well'. The bulk of the recording was done by Luigi Pasquini at Glasgow's 'Anchor Lane Studios' and it was all mixed and mastered by Dejan Lapanja in Skofje Loka, Slovenia.

Album opener 'Low' enters on a sharp little acoustic riff before Iona's world weary vocal tells us "Me and my friends we talk a lot, 'bout where the money's gonna come from when the oil dries up" and we are straight into thought provoking, serious territory. I like Iona's voice, it has a timeless sort of feel, much more Americana than traditional folk to my ears and really engages the listener, particularly when underpinned by Paul's harmonies. The track gradually pushes and builds as other instrumentation rolls in and it's a fine scene setter for the record.

'One More For The Road' is another gently reflective, restless number before 'The Fermi Paradox' moves things up a notch with its hypnotic banjo and drum driven rhythmic pulse that almost imperceptibly fades out, and then back in, for a whistle stop version of Peter Green's 'Oh Well'.

'First Of April' is a sensitive, beautifully sung lament to the eighteen lost in a helicopter accident off the coast of Aberdeenshire in 2009, 'Arsenic' is as pithy a social comment as the title suggests and 'Why We Fight' is a rolling, percussive, defiant 'call to arms' railing against contemporary ills, before the simply lovely 'Rise & Fall' slows things down again, but along the way still boasts some fine slide guitar fills from Paul.

On now to the final third of the album, 'Years' rides in on another propulsive, picked guitar riff and sounds for all the world like early Fairport Convention, 'Elegy For A Seaside Town' mourns the loss of formerly vibrant coastal holiday towns to deprivation and disrepair, 'The Reckoning' is dark, brooding and dramatic, building throughout to a rather lovely crescendo and fade out, and then 'All My Days' ends the proceedings on a sublime note with my favourite Iona vocal on the album.

'We Are Made Of Light' is a fine record from 'Doghouse Roses', full of well constructed songs and performances of the quality that you can only arrive at through years of playing together.