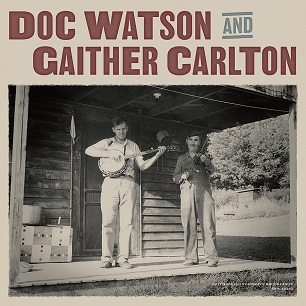 
Well now, here's one to make old time American music enthusiasts think all their Christmases have come at once. Born in 1923 in North Carolina, Watson is a legend in traditional bluegrass, folk, country, blues, and gospel music, the winner of seven Grammys as well as a Lifetime Achievement Award while Carlton was his no less acclaimed fiddler father-in-law. Although the pair performed together, it was rarely North Carolina, but this archive collection of largely unheard tapes marks two such occasions, recorded at two shows in New York City's Greenwich Village in October 1962.

Put together by Peter K. Siegel with song notes by Mary Katherine Aldin, even with studio finessing the sound quality is at times, inevitably a little rough round the edges, but that only serves to add to the sense of listening to music history. Featuring Watson on guitar, banjo, autoharp, voice with Carlton on fiddle and banjo it opens with the latter's signature tune, the 86-second instrumental Double File, one of just four taken from the show from October 12 at NYU School of Education, with the rest of the 'A'side coming from October 18 at Blind Lemon's, NYC. These are a mix of familiar and lesser known numbers, the former including 'Handsome Molly' (a number the pair played at the 1964 Newport Folk Festival), 12-bar blues 'Corrina', 'My Home's Across the Blue Ridge Mountains' and 'Bonaparte's Retreat' as well as the Blind Lemon arrangement of 'Groundhog' Gaither on banjo and Watson on fiddle, the two other tracks being the brief fiddle instrumental 'Brown's Dream' and 'He's Coming To Us Dead', a song about a family awaiting the return of their son that likely dates from the Civil War.

Side B opens with one of the three remaining Oct 12 numbers, the banjo tune 'Willie Moore', the others being fiddle contest staple 'Billy in the Low Ground' and, featuring Doc's brother Arnold Watson on banjo, the Friends of Old Time Music version of 'Groundhog' with Watson on autoharp and Gaither on fiddle.

The others come from the second show, first up being the popular The Blue Ridge Mountain Blues and also including 'Goin' Back To Jericho', one of the earliest banjo tunes Watson learnt from his father, and the poignant old timey ballad 'The Dream of the Miner's Child',a variation of the British music hall song 'Don't Go Down In The Mine, Dad'.

Presented with a lavish booklet featuring Aldin's introduction, Siegal's background to the project and an appreciation of Carlton by Stephanie Coleman along with rare photos, this should be an essential part of any old time music afficionado's collection.

Am I Born To Die