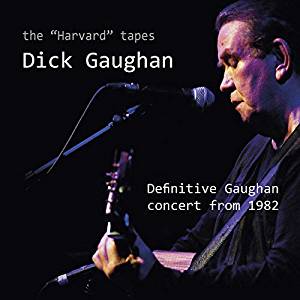 
Dick Gaughan’s been at the cutting edge of Scottish folk music for almost five decades, genuinely multi-skilled but mostly feted as the proud possessor of a uniquely commanding, fully expressive voice and a tremendous guitar technique. Right now, he’s (temporarily) out of action following a stroke he suffered back in 2016, so it’s great to have this set, effectively Dick’s seventh album for Greentrax, which brings into circulation a tape of a live concert given in a Baptist church near the Harvard University campus in Cambridge, Massachusetts at the end of October 1982 on the final night of an extensive two-month tour across America. Fortunately, a recording was made on that night by a local broadcaster and journalist, Brian O’Donovan, and the tape has been mastered for release by Ian McCalman (who, with label boss Ian Green, has met all production costs in order that a large royalty may go to Dick himself to assist in his enforced “rest” from touring). The recording sounds truly splendid, and captures Dick on one of his many peaks, just over a decade into a professional career that began in 1970. Since which he had founded Boys Of The Lough and Five Hand Reel and developed a vital and charismatic solo profile, releasing his landmark Topic album A Handful Of Earth only a short time before the performance now enshrined for posterity on this magnificent new CD.

The Harvard set brilliantly encapsulates and reflects the special nature of Dick’s wide repertoire, from his passion for Scots traditional song to his deep-rooted, highly principled politics and his penchant for fervent social commentary. A number of the songs are by now counted among Dick’s all-time “greats”, and these Harvard performances must be reckoned virtually unsurpassed. The set takes us from the unparalleled dichotomous beauty of Burns’ Westlin Winds and Phil Colclough’s Song For Ireland through to the blistering rant of Leon Rosselson’s World Turned Upside Down and an immaculately turned take on Ed Pickford’s The Worker’s Song, via Tommy Sands’ anthemic Your Daughters And Your Sons and a lovingly sensitive rendition of John Brown’s Upon The Road, then still finding room for a fine treatment of the traditional ballad Glenlogie and, as fiery opener, the signature Erin Go Bragh. But an undisputed highlight of this excellent set is a real rarity: a one-off performance with fiddler Johnny Cunningham (with whom Dick shared this particular concert bill) of The Freedom-Come-All-Ye. Another high point of the set is its lone instrumental item, a jaw-dropping three-reel medley (which Dick explained he’d recorded with Andy Irvine but never surfaced on record); this, notwithstanding its undeniably virtuoso display of technique, is the epitome of musicality.

This CD generously fills up on playing-time (and also adds much value in the process) by appending three bonus tracks. The first two – the venomous self-penned Lemmings and an altogether gentler instrumental, the slow air Sliabh Na mBan – come from recordings made at Milngavie Folk Club in 2010/12, whereas the third, Dominic Behan’s Connolly Was There, is drawn from the Greentrax archive.

This could all too easily have been a very short review: “Absolutely vintage Gaughan – heartily and unreservedly recommended”. But it wasn’t! So now just go out and buy it!