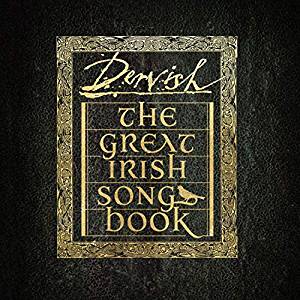 
For 30 years the Sligo-based band Dervish has been renowned as one of the world’s foremost, and most charismatic, purveyors of Irish traditional folk music, possessing both a gift for fully utilising the musicianship and expertise at their disposal, and a well-tuned ear for the imaginative touch that invariably lifts their interpretation above that of their competitors. Even so, I admit to more than a little trepidation on learning that Dervish would be releasing an album of what amounted to Irish folk “standards” (even titling the project as a would-be counterpart to the Great American Songbook concept), and that the band would be involving guest singers from various musical genres, principally from the worlds of folk and Americana, to choose their own “most cherished song” to perform with the band. This gambit might well have been a recipe for disaster, running the danger of (at best) misrepresenting or diluting the tradition and/or (at worst) selling out by turning the songs into bland commercial fodder to appease the marketing men. However, it’s good to be able to report that (rather in the manner of a similar project coordinated by The Chieftains a few years back), while not quite an unqualified success (for this listener at any rate) it’s by no means a turkey in the straw.

There’s no questioning the stature or calibre of the guest vocalists, but rather than list them all along with the individual songs they sing (thereby wasting precious column inches) I’ll stick to awarding points for the highs for the most part then, But one general point to be made at the outset is that Dervish themselves are on absolutely top form, as one would expect, and they accompany and embellish with tasteful sensitivity yet also display an abundance of idiomatic energy that sits hand in hand with their natural rapport and exemplary musicianship. To whit, the band’s own long-serving principal singer Cathy Jordan takes the lead for The Rambling Irishman and Dónal Óg, turning in impeccably phrased yet spontaneously responsive accounts of these much-covered songs. The collection ends on a high with Abigail Washburn’s slightly chilling, gloriously spooky take on The Parting Glass (which I’d always considered a Celtic song rather than specifically Irish, but that’s splitting hairs I suppose).

Another special contribution is Rhiannon Giddens’ beautifully melancholy take on The May Morning Dew (normally sung unaccompanied, but here strongly featuring the exceptional low-whistle playing of Liam Kelly). Elsewhere there’s plenty of contrast too, including a rollicking high-octane romp through There’s Whiskey In The Jar featuring Nashville bluegrass outfit The SteelDrivers; a wistful rendition of The Galway Shawl from Steve Earle; a charmingly unsentimental Down By The Sally Gardens from Kate Rusby; and an unexpectedly passionate Fields Of Athenry from Jamey Johnson that almost makes me hear the song afresh and appreciate it! Another surprise – and a less expected choice perhaps in among the hoary old standards – is Andy Irvine’s 1973 composition (and early-Planxty classic) The West Coast Of Clare, which is here very well characterised by David Gray.

Against these sometimes revelatory successes, though, must be weighed a slightly over-dramatised Rocky Road To Dublin (sung by actor Brendan Gleeson), and comparatively routine accounts of She Moved Through The Fair (Andrea Corr) and Molly Malone (Ismelda May). And then there’s Vince Gill’s treatment of On Raglan Road, which doesn’t seem to suit his high tenor delivery (and neither does the chirpy waltz-time tempo, IMHO).

Back to the positives though, and I’d commend the packaging which includes an informative booklet containing all the song lyrics and just enough interesting detail in the brief notes on the songs and their origins.

Down By The Sally Garden