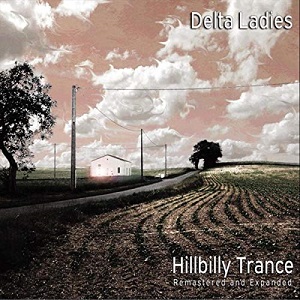 
The band Delta Ladies was formed back in 2012 from the ashes of quirky North London R&B band Elephant Shelf; founding members were Vicky Martin and Dee (Diana) Stone, but from the start they were invariably augmented in performance by a number of musician friends (as venue and occasion permitted), leading to a certain unpredictability about what was going to happen at any point; live gigs might thus vary from pure acoustic to lightly amplified. The Delta Ladies’ debut CD, Refugee (2014), was very much in this mould, deploying Alan Glen (harmonica), Tony Reeves (double bass) and Phil Underwood (accordion) to gently augment Vicky’s banjo, guitar and dulcimer and Dee’s violin. Having said that, something of a definitive musical signature could be determined from the styling of the Ladies’ music – it’s been described, with to my mind only partial accuracy, as a place where “old-time Americana meets the Velvet Underground”, but there’s more to it, an almost sanctified country-blues vibe, and a looser, less intensely urgent drive generally. Individual album tracks would stretch out unashamedly, for instance, and the musical travel could either be quite rewarding or slightly aimless. There’s a similar caveat with Hillbilly Trance, perhaps, but identifying this trait – and “going with it” – is very possibly the key to appreciation of their music.

Hillbilly Trance, the Delta Ladies’ second album, was first released earlier this year, but in a radically different, almost tentative early-limited-edition version. It’s now been completely remastered by producer Tali Trow, while a key track omitted from the original edition (the ballad-like Thieving Boy) has finally been completed, new edits made, and extra tracks added. It turns out too that Hillbilly Trance is quite cunningly named, not least since it gives the biggest clue to its twin elements and to the nature and development of, and the shift in, the group sound since Refugee. Three years ago, in 2015, Vicky and Dee added world music percussionist Danny Bryan to their regular gigging lineup, and the trance element of their sound became even more pronounced. On the new album, almost every track clocks in at well over five minutes, and a chilled-out state of trance prevails for much of the time. But that doesn’t mean the music sends you to sleep with what to the inattentive listener may feel like an apparent lack of purpose. For it’s a genuinely original, and intoxicating, blend of eastern, western and primitive country-blues, one to which it now feels very much what the sometimes tentative gestures of parts of Refugee were always striving towards. But one also gets the feeling that its birth has been a touch difficult – and indeed, we learn that large parts of its gestation were affected by a series of traumas including illness, house moves and the death of flautist friend Nick Newall (who plays on two of the album’s tracks).

Hillbilly Trance is audibly a continuation of Refugee then, in that Alan Glen and Tali Trow both play on a majority of the tracks and make a distinct contribution to the overall sound-picture. The political commentary of tracks like Seventh Day Blues and Devil’s Work Today is almost subliminal, I’d say, subjugated to the induced state of trance (I won’t suggest apathy, but it’s certainly laid-back and mesmerising). The 44-second primitive banjo tune Redcar Blues, however, scores too with its pithy lamenting response to a TV new item. Vocals – where used – are also bluesy and laid-back, and in all honesty sounding arguably more male than female – which might seem a strange thing to say, I admit! At times, the combination of trance drones from the fiddle or synth keys and the motoric percussive embellishments trail their musical caravan in a manner that recalls Third Ear Band, or at other times the antiquity of primal blues is summoned. It’s an intriguing mix, although the extended rambling mode of several tracks may feel in need of some slight curbing to regain a suitable focus for home listening (as opposed to the more conducive chill-out groove of a live gig). Some listeners may need more time to get into it – and at just over an hour they might get a long way towards succeeding with this disc. Be warned tho’ – once you’ve got the trances into your brain and psyche, it may well take you seven years or more to get rid of them!…