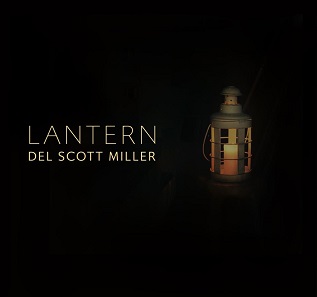 
Del Scott Miller is a songwriter and guitarist from Barnsley in South Yorkshire. Very much a teacher and student of guitar, he has played and performed within a broad base of styles and genres.

"Pale And Distant" the opening deftly dreamy John Renbourn like instrumental, at just under a minute, seems to exist as a prelude and to catch out listeners who have just enough to press play and settle in the chair before "Stains" kicks in, and kick it does. Del's guitar is part Stiff Little Fingers, part Metaltastic Jethro Tull, Steve Booth's drums are busy and both the lyric and Millers vocal are frenetic and passionate. "Second Born Of Five" is a furious ballad, manic acoustic troubadour meets Billy Bragg. Again the delivery and lyrics are compelling with an evocatively told tale of dog fighting, seen from the perspective of the dog.

"In Water" is a bruised duet, with Steph Shaw adding a second voice, spitting out words in this dark tale of a mothers end while Del builds a brooding atmosphere. "The Beacon And The Brine" is another wonderful instrumental that will have Renbourn and Jansch stopping their endless celestial duet to listen, smile and nod along. Stunning too on this track is Dom Dudil's smoldering violin. "Mast" is another taut, electric violin, guitar, bass and drums stormer, imagine a more muscular Levellers or more contemporary Ferocious Dog. The small moments acoustic interlude with guitar and violin just heightens the Electric Fairport Swarbrick burn when the band kicks in.

On "Throw Down The Rope" and "The Quietness" Del's passionate vocal has a touch of Graham Nash, with a little bite added, the insistent guitar adds tension to the lyrics, the whole effect is rather hypnotic. "Manifesto" opens with a stunning run up and down the guitar, with a little conscious or unconscious borrow from Stephen Stills " Black Queen". Whatever its genesis the playing is superb, full of energy, space but still with a hypnotic pulse, a slightly effected vocal, like a megaphone at a rally delivers this dark manifesto. The version of the traditional "The Oaks Pit Disaster", sung by Del and Steph is chilling and captivating, pared back to two voices with pace and great delivery.

"Little Blinder" is written for Barry Hines, Barnsley writer famous for Kestrel for A Knave and Threads. With a great rock n roll guitar and an uplifting feel throughout this song, with a lyric that titles the album, was commissioned by the campaign to have Hines honoured by a memorial in his home town. Del Scott Miller sings and plays with passion about themes that are important to him and run through his veins, this connection gives LANTERN an energy and life and makes for an engaging listen.

Throw Down The Rope